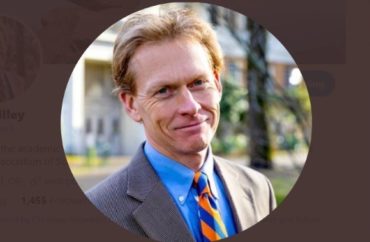 Recently, Lexington Books reversed its commitment to publish Gilley’s book “The Last Imperialist,” a biography of a late colonial official. It was axed just two weeks before the book was due to ship, Gilley wrote in The Wall Street Journal.

“I attribute the ease and suddenness of my latest cancellation to this year’s Black Lives Matter moral panic. It has taken cultural totalitarianism to new levels, challenging the U.S. ethic of freedom,” Gilley wrote.

UPDATE: The Taliban has won. Our book series has been yanked by the publisher, thanks to Maoists. Hey America: what country do you live in? pic.twitter.com/zCUvhLOc9S

Gilley, clearly, is not once to mince words — or back down — despite his peers’ Herculean efforts.

In 2017, his scholarly article “The Case for Colonialism,” published in the peer-reviewed Third World Quarterly, led to petitions denouncing Gilley and his piece that drew upwards of 16,000 signatures, as well as demands for his firing.

The article was taken down after the journal’s editor received credible death threats. The piece was also likely the impetus for an administrative probe Gilley faced right after the controversy (he has since been cleared).

Gilley forged ahead with his scholarship, offering a class called “Conservative Political Thought” at Portland State. That, too, was cancelled by his peers in 2019.

In response, Gilley continued to call out what he describes as “the putrefaction of the university.”

In an essay for First Things earlier this year, he suggested five ways to take back power in the academy: enforce existing laws that protect free speech and equal opportunity employment; abolish university offices of ‘diversity, equity, and inclusion’; stop letting professors be the only ones in charge of hiring; abolish grievance studies; and unite the resistance.

“That kind of moral courage is what we need today if we are to release the academy from the death grip of the left and make it useful to society again,” Gilley wrote.

For that rhetoric, and everything else he’s done, Gilley found himself the sole target of his own Portland State political science department, which created a massive report on Gilley and then passed this year department level-resolutions in an attempt to muzzle him.

“Among the changes is the creation of a process for making statements of condemnation against department members whose work offends a consensus of the department,” reports Jay Schalin at the Martin Center for Academic Renewal, adding it “offers a path for politicized faculty members to ‘police’ colleagues whose research or speech does not pass ideological tests.”

“The actual process approved by the political science department is chilling: a single faculty member with an axe to grind against another can propose a statement of condemnation against the other’s extramural statements,” Schalin wrote. “…Given this political climate, the new process is a blueprint for condemnation of legitimate scholarship based on ideological reasons.”

For his part, Gilley has the receipts — he used a Freedom of Information Act request to gain access to all his peers’ hand-wringing over him and posted them on his personal website under the heading “The PSU ‘Diversity’ Investigation.”

“The key point here is this is totally illegal and unenforceable and the department knows it,” Gilley told The College Fix in an interview.

But the action is another big red flag, he added.

“The academic left has realized the revolution can only go so far, so they need to come up with technical reasons to sanction faculty who are not toeing the party line,” Gilley said.

But Gilley is not slowing down. He is working to find a new publisher for his book and also recently launched a “Critiques of BLM Reading Group” for college students. Predictably, the reading group drew backlash within academia. That hasn’t stopped Gilley from offering it.

He’s also got his share of supporters, too. A Change.org petition titled “Vindicate Dr. Bruce Gilley’s Personal and Professional Reputation” has more than 4,000 signatures.

“Gilley’s professionalism is not at issue. What is at issue is his freedom to speak and write freely—and the freedom of every scholar and interested citizen to hear and read his arguments. Gilley’s censors fear the facts—as does every sect that seeks to substitute its dogma for the truth,” the petition states.

MORE: Bruce Gilley still smiles despite attacks against him