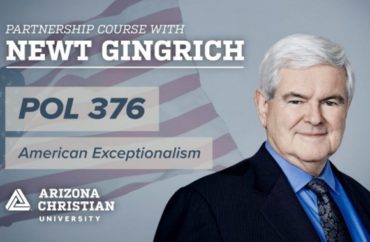 Former Speaker of the House Newt Gingrich has partnered with Arizona Christian University to provide guidance and leadership for a class on American exceptionalism.

While he is not the main professor for the political science course, he helped shape the curriculum, will answer students’ questions via email, and even make appearances via Skype.

Gingrich spends most of his time in Rome with his wife, Callista, who serves as the U.S. ambassador to the Vatican. But it was his idea to partner with an institution of higher learning with his company, Gingrich 360, to help advance the idea of American exceptionalism, and Arizona Christian University seemed like a great fit, he told The College Fix via email.

“Communicating what makes America unique is a passion of mine. I wrote a book on American Exceptionalism called ‘A Nation Like No Other.’ Since ACU already had a course focusing on the topic of American Exceptionalism, I worked with Dr. Munsil, the professor, to incorporate the speeches and books that shaped my understanding of America into the curriculum,” he said.

Professor Tracy Munsil is the main professor for the spring 2019 class, and Gingrich will be involved through his virtual office hours and connecting with the class online.

As part of the course, students will ask at least two questions of Gingrich through email, “but that’s always open if they have more questions during the course of the semester,” Munsil told The College Fix via email.

“[We] plan to make it really exciting. [We] are trying to get them to not only understand the concept of American Exceptionalism but understand why it’s important for them as believers, as Christians,” Munsil said.

Among students, “the excitement about taking the course has been very high,” she said.

Gingrich explained the hurdles he will face as he works from Rome.

“The time difference will be a bit of a challenge, but the wonders of the modern information age present all sorts of opportunities,” Gingrich said.

The course topic is very important, he said.

“Americans need to understand that much of what made our country so different at its founding has also made us successful. They need to understand the fundamental qualities which need to be preserved for America to remain safe, prosperous and free, even while we make social progress on certain issues,” he said.

According to campus officials, the course will focus on “aspects of the American political system that make it unique among nations, including the role of the biblical worldview, Christian heritage, religious liberty in the American founding, the idea of America embodied in the Declaration of Independence and other founding documents, the American republican ideal, the concepts of liberty, virtue, and self-government in the American context, capitalism and the free-market system, and the importance of the First Amendment and other constitutional protections to a free society.”

The former speaker said he also believes that the amount of left-leaning influence on campuses provides an inaccurate view of America.

“Universities are now so overwhelmingly left-leaning that students get a grossly distorted and negative view of our national identity and history,” Gingrich said.

“Yes, there are shameful moments in American history, but they are so because we failed to live up to our ideals and unique character. Those failures are the exceptions that prove the rule. Today’s students are barraged with a nonstop attack on America’s history, and as a result, they leave university with the desire to tear down everything, including what had worked so well for our country historically.”

MORE: ‘The Case for Colonialism’