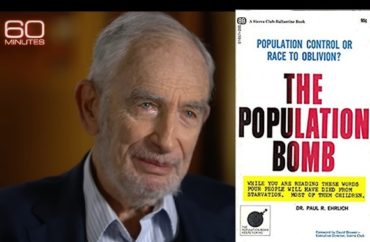 Academics who push bizarre ideas should remember that, unfortunately, some people take them seriously and make decisions based on their supposed credibility.

Discredited Stanford University biologist Paul Ehrlich is one such example.

He massively failed with his predictions made in the book “The Population Bomb.” While he physically neutered himself, he should have instead muted himself.

Sadly his anti-natalist views, in support of contraception and abortion, took hold.

That’s on the macro level.

But consider the micro level, as evidenced by a recent letter to the editor in the Wall Street Journal. The letter was responding to “60 Minutes” platforming Ehrlich for some reason as he continues to claim, decades later, that the world has too many people.

“I was a college student when I read Mr. Ehrlich’s ‘The Population Bomb,’” Kenneth Emde of Woodbury, Minnesota wrote. “I took it to heart and now have no grandchildren, but 50 years later the population has increased to eight billion without dire consequences. I was gullible and stupid.”

Of course, he did have agency and free will and could have had more kids, but the experts, given their credibility as authors and professors, make people more likely to listen to them. People could have invested their money with someone besides Bernie Madoff too, but his alleged expertise suckered people as well.

Ehrlich is not alone in the harm he has wrought on people. After all, medical professionals who push transgenderism are guilty too of ruining lives – including sterilizing them for life, which coincidentally lines up with the anti-natalist view of climate alarmists.

It is not possible to change genders, and what individuals who struggle with gender dysphoria need is counseling and other emotional support to cope with their mental illness – just like people who have anxiety, depression or other psychological problems.

But medical professionals too often have knives and syringes out, ready to remove healthy uteruses or breasts and inject kids with puberty blockers. This forever ends a woman’s chance of breastfeeding her kids – as formerly gender-confused teen Chloe Cole knows. Medical professionals removed her healthy breasts in such a way that eliminates the possibility of her being able to nurse in the future – all based on the faulty science that is transgender research. Research that seeks to confirm a lie often turns out to be faulty, after all.

The University of Washington, for example, knowingly kept quiet on a flawed study that claimed that puberty blockers provided psychological benefits to gender-confused kids.

Academic researchers included Diana Tordoff, Jonathan Wanta and Arin Collin of the University of Washington-Seattle. Cesalie Stepney and Kym Ahrens of the Seattle Children’s Hospital and David Inwards-Breland of the University of California San Diego School of Medicine also contributed to the study.

Once the flaws were known, UW officials kept quiet because of the “overwhelming amount of positive coverage” which, in their opinion, meant there should not be a “proactive response” beyond corrections on their news site. No steps were taken to alert the media of the faults in the study.

As if that’s just a minor side effect, like headaches or stomach pains.

She has filed a lawsuit against two healthcare professionals who helped her remove both her breasts.

Bad theories have real consequences – and academics should be very careful before taking their political agenda and trying to masquerade it as a serious and reliable academic approach to an issue.