This is what Haskell Indian Nations University, a federally run tribal institution in Kansas, will be known for in the next decade, and it has only its president to blame.

Press and civil liberties groups warned Graham that not only would he lose “qualified immunity” as a public official for ignoring “clearly established law,” but that his “directive” was endangering the university by violating its 1989 settlement with the newspaper. (Yes, this press freedom dispute goes back more than 30 years.)

So Graham backed down. But he didn’t tell anyone except the feds.

Nally has been operating under the president’s unconstitutional directive for three months because the president failed to send his rescission letter to the student or the Foundation for Individual Rights in Education, Student Press Law Center and Native American Journalists Association, who intervened on his behalf.

FIRE showed The College Fix the Graham letter it received Wednesday from the Bureau of Indian Education, which said the president signed it Nov. 20. It’s undated, however. Graham didn’t send it due to “administrative error,” according to the feds.

Here’s what he said. 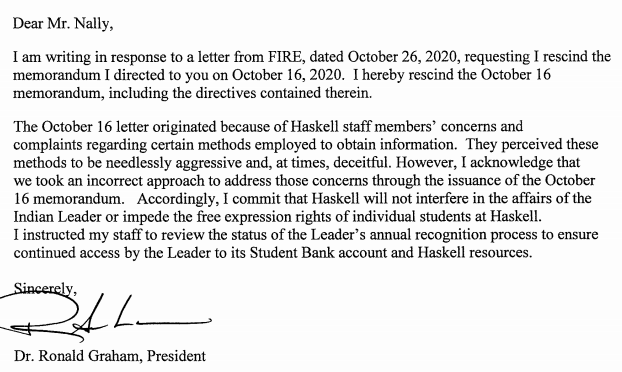 He promised that “Haskell will not interfere in the affairs of the Indian Leader” – hard to believe, given its contempt for the 31-year-old settlement with the newspaper – or “impede the free expression rights of individual students at Haskell” (also dubious). 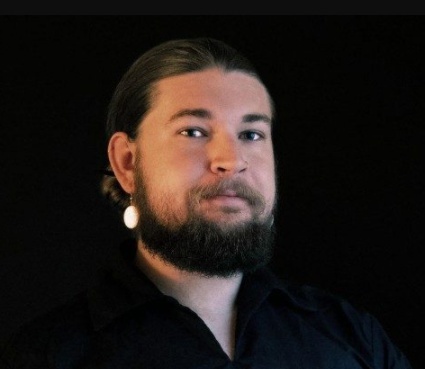 The university’s “failure to rescind the directive for months was an outrageous and clear violation of Jared’s [right] First Amendment rights,” a FIRE spokesperson wrote in an email:

We remain incredibly frustrated by the lack of concern — let alone diligence — shown by the university to quickly resolve the issue. We also plan on following up next week with an additional request to ensure that this misconduct is not repeated: we ask that the code of conduct include provisions ensuring the free speech rights of student journalists.

Lindsie Rank, the FIRE representative on the October warning letter, said the directive was a “flagrant constitutional violation from the start, yet it lasted 89 days”:

That’s 89 days during which the editor of a student newspaper was banned from simple newsgathering tasks like asking questions of officials, criticizing HINU administrators, or recording interviews. We hope HINU learned that they can’t tell student journalists not to be student journalists.