This is because Roderick McLean is the vice president of Lockheed Martin, and “inviting someone who represents the military-industrial complex to a celebration [honoring] MLK’s legacy was disrespectful,” according to Students for Justice in Palestine president Marisol Mendez.

Further, McLean’s presence shows that KSU “does not truly respect MLK [and] the marginalized groups on our campus or our voices,” Mendez told The Sentinel. 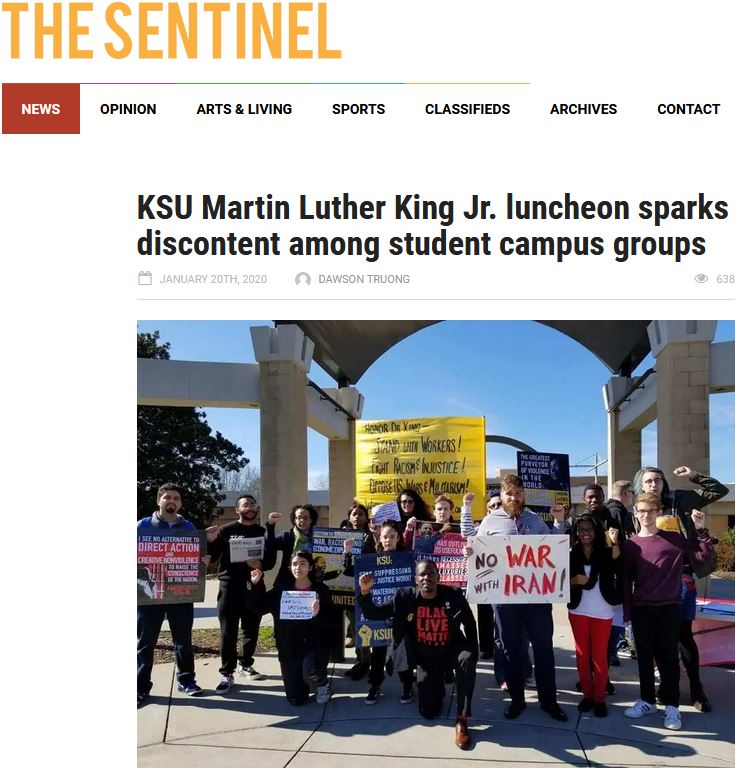 On its Facebook event page, KSUnited — which “fights to protect the rights and dignity of all students/faculty/staff in minority groups, against suppression of social justice work of students/faculty/staff” — said that “it may seem honorable” to have McLean, a black engineer and HBCU (historically black college/university) graduate as keynote speaker; however, given his profession, it reflects KSU’s “direct support of war.”

Workers World notes that Marc Lamont Hill also has been an MLK Day speaker at KSU.

The group concluded with several demands of KSU administration:

We demand that KSU respect the anti-war legacy of Dr.King and return full control of MLK Week, budget, and choice of speaker to students from marginalized communities so that MLK week can again reflect Dr. King’s philosophy. We demand the event again be open and accessible to the public and KSU students, being that Atlanta is the home of Dr. King. …

We demand KSU keep its promise of implementing an anti-racist education center with experts on Black history and racism; whose expertise could have been sought out to prevent this situation from occurring. We believe that marginalized students should have full control over MLK Week, that KSU should cease its suppression of social justice work, and for KSU’s administration to address and take action against the hostile environment on campus through the creation of an anti-racist education center.

The Sentinel reports protesters also held a “die-in” at the Convocation Center, site of the MLK luncheon. Participants had signs on their chests stating “3 percent of US military spending could end world hunger” and “Lockheed Martin supplied weapons for the conflicts in Yemen and Syria.”

And make note: KSUnited says “we must remember” that Martin Luther King Jr. was assassinated by the FBI.

MORE: MLK Day seminar for white students: ‘How to Embrace Your Inner Racist’