Critical race theory, or CRT, is moving beyond the walls of academia as a new report shows that Canadian diplomats are being trained according to its dictates.

Via a freedom of information request, The Toronto Sun got a hold of training materials used at the Global Affairs/Canadian Foreign Service Institute.

Unsurprisingly, they’re remarkably similar to things with which regular readers of The College Fix should be familiar.

For example, under the section “Myths and Facts,” diplomats are taught that “reverse racism” does not exist, racism cannot be vanquished via education, and the concept of merit is bogus.

The document also states “racism and colonialism are foundational” to Canada, and that racism “specifically and intentionally dehumanizes non-white people” (but especially black).

“Whiteness” is defined as “specific dimensions of racism that serves to elevate white people over people of color” … it is  “dynamic [and] relational” and functions “at all times and on myriad levels.” 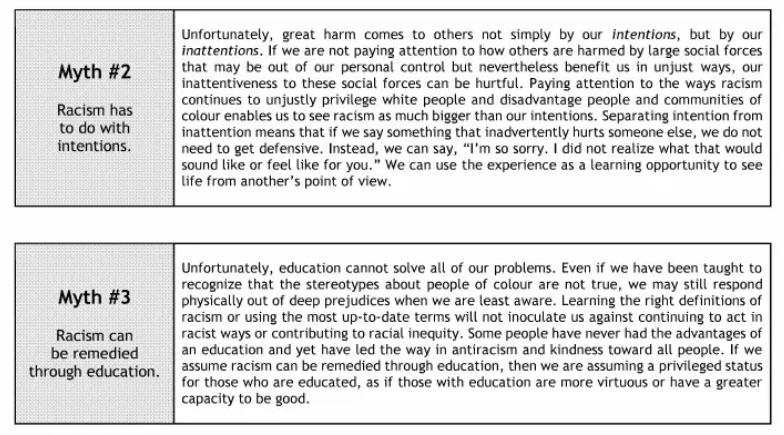 According to the National Post, the document notes that, without specific anti-racist policies in place, racism cannot be eradicated: “It is not just the absence of discrimination of inequities, but also the presence of deliberate systems and supports to achieve and sustain racial equity.”

A chart outlining examples of “white supremacy culture” includes the principles of “objectivity,” “individualism” and “worship of the written word.” The materials also brand the concept of “pulling oneself up by one’s bootstraps” as an example of “covert white supremacy.” The term “covert white supremacy,” which Global Affairs adopts from the Safehouse Progressive Alliance for Nonviolence, is defined as any white supremacy that is “socially acceptable.” …

[C]ritical race theory holds fast to an idea of an enforced system of race hierarchy that places Black people at the bottom. This is apparent in the Global Affairs literature, even to the exclusion of inequity problems that are more unique to Canada. There is little mention of what is arguably Canada’s greatest act of oppression: Indian Residential Schools. The century-long assimilation of Indigenous children is mostly mentioned in passing as a government policy of “forcefully removing Indigenous children from their homes.” …

Slavery, by contrast, is mentioned more than a half-dozen times. While chattel slavery did indeed exist for more than two centuries in colonial Canada, with about 3,000 estimated slaves in pre-Confederation Canada, Black historians have argued that it was never the defining institution that it became in the United States, which had four million enslaved Africans on the eve of emancipation.

The University of Waterloo’s Kathy Hogarth, a professor of social work whose publications include “A Space for Race: Decoding Racism, Multiculturalism and Post Colonialism in the Quest for Belonging” and “Decolonization and Internationalization: Critical Challenges for Social Work Education in Canada,” told Yahoo Canada News that using critical race theory is “crucial in order for things to be different moving forward.”

Hogarth said CRT will “centralize” race whereas past practices looked at race as something like a “maybe.” Echoing other “anti-racism” advocates, she claimed one is “complicit” if they do not support anti-racist practices: “Neutrality isn’t an option in dismantling systems of racism.”