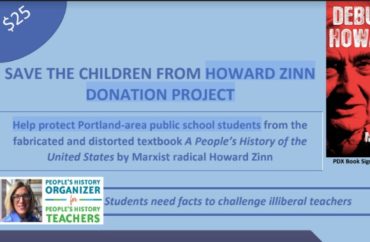 The history department at Portland State University is declining to co-sponsor an event on a new book critical of the late historian Howard Zinn, on the basis that its author does not have a doctorate in history.

Yet it previously co-sponsored an event on indigenous activism with a speaker who lacked history credentials, a PSU history professor reminded the department chair in an email thread shared with The College Fix.

Bruce Gilley invited Mary Grabar, who received her doctorate in English from the University of Georgia, to speak about her recent book “Debunking Howard Zinn: Exposing the Fake History That Turned a Generation Against America” (below).

It argues that the influential anti-American academic “rode to fame and fortune” by falsely characterizing Christopher Columbus as a genocidal conqueror, inspiring the national campaign to replace Columbus Day with Indigenous Peoples’ Day.

After a misunderstanding over what exactly Gilley was asking the department to do, Chair John Ott did agree to distribute an advertisement for the event, however, The Fix confirmed with both academics.

But Gilley told The Fix he’s not satisfied with the department simply promoting his event. In an email, he explained the relevance of Grabar’s book in the community: “Zinn is [an] assigned textbook in Portland Public Schools. Local historians love him, [and] Grabar challenges the beast at its heart.” 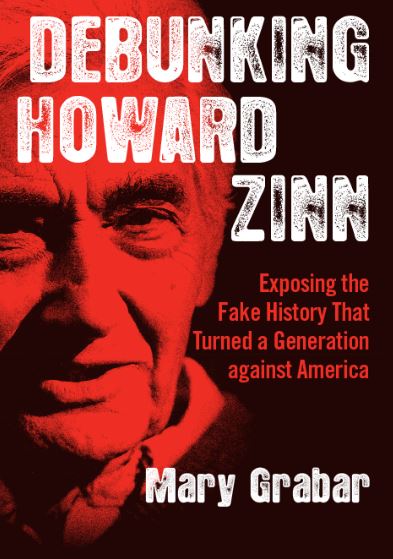 Grabar, who considers Zinn a Marxist, told The Fix in an email that the historian’s false claims go all the way up to 2003. (He died in 2010.)

Zinn’s critics go beyond the right. Stanford University promoted a critical review of “A People’s History” by its professor of history education, Sam Wineburg, in 2012.

“Zinn’s desire to cast a light on what he saw as historic injustice was a crusade built on secondary sources of questionable provenance, omission of exculpatory evidence, leading questions and shaky connections between evidence and conclusions,” Stanford summarized Wineburg’s review in American Educator.

Grabar’s Portland visit, now scheduled for January, is part of a bigger effort to “Save the Children From Howard Zinn,” according to a press release last week by the Oregon Association of Scholars, which Gilley leads.

‘Would you prefer to be more honest about why the faculty made this decision?’

In a September email shared with The Fix, Gilley asked Ott and Marvin Lynn, dean of the College of Education, if their departments would be interested in co-sponsoring the Grabar event.

Hosted by the Oregon Association of Scholars, which Gilley leads, the event was scheduled for November at the time. “I would ask only that you book the room at university rates and we will cover all other costs,” Gilley wrote to Ott and Lynn.

Ott promised to “alert the Friends of History, with whom we generally partner in public programming.” FOH is a “community-based organization affiliated with” the history department that hosts lectures and discussion groups, and even provides scholarships and grants.

After Gilley sent the event notice to Ott last week, the chair responded that FOH had declined to co-sponsor because “Grabar is not a historian (i.e., does not hold a doctorate in History).”

Could you explain therefore why the department has chosen to sponsor and share this event by Michelle Jacob who also is not a historian and does not hold a PhD. In History? Would you prefer to be more honest about why the faculty made this decision?

He linked a Facebook page for a November 2015 event titled “Thanksgiving: Celebrating the Spirit, Wisdom, and Activism of Indigenous Cultures.” It featured Michelle Jacob, a member of the Yakama Nation, who now teaches at the University of Oregon’s College of Education. Her doctorate is in sociology, and she has no listed credential in history.

That event was hosted by PSU’s School of Art + Design and co-sponsored by the history department and FOH, among others. (The event is also still listed on PSU’s website, below.)

Asked why he declined to co-sponsor Gilley’s event but the department co-sponsored the Jacob event four years ago, Ott told The Fix in an email that he just became chair this fall. “I was not involved in any decision-making at that time” of the Jacob event. Ott otherwise declined an interview on the record.

Grabar is making this Portland visit because its public schools use Zinn’s books on history, mostly American history, she told The Fix in a phone interview. Her book debunks and exposes the plagiarism and inaccuracy produced by Zinn, she said: “It’s so bad.”

“Debunking Howard Zinn” reviews key historical points and checks what Zinn said against his sources. “I found rampant plagiarism” in his work and learned he was “a member of the communist party, although he denied it,” Grabar said.

In a followup email, she told The Fix why she’s qualified to critique Zinn’s work despite not being an historian. Grabar taught “college English for twenty years” before joining the Alexander Hamilton Institute for the Study of Western Civilization as a resident fellow. (The institute was founded by Hamilton College professors, but opposition from progressive faculty members blocked it from becoming part of the college.)

The rules for history writing, as laid out by the American Historical Association, are the same that she used when grading students’ research papers, Grabar continued. These included “documenting findings, representing sources accurately, using evidence honestly, and avoiding plagiarism.”

She has failed students who did far less than “what Howard Zinn did in his dishonest and plagiarized ‘history’” book, Grabar wrote. She confirmed that she employed the same standards of scholarship to “Debunking Howard Zinn” that she used in her thesis, dissertation and scholarly articles.

Grabar also noted the “high praises” on her book jacket from eminent historians at the University of North Carolina and Emory University.

In addition to hosting Grabar Jan. 22 on the PSU campus, the Oregon Association of Scholars launched a book donation drive for her critical work on Zinn.

It’s intended to “counter the fabricated and distorted history of Marxist radical Howard Zinn that has been adopted as an assigned American history textbook in many middle, high school, and college classrooms in Oregon,” the group said in a press release.

Grabar’s book documents the “mendacity” of Zinn’s work “in chilling detail, showing the negligence and abuse of Oregon public school and college students forced to read it,” Gilley said in the release. “Parents and the educated public have a duty to stand up to illiberal bullies in the education establishment and demand that truthful history be taught.”

His group asks members of the public to purchase a copy of “Debunking Howard Zinn” for donation to public libraries and schools in Oregon, or donate $25 to the association to buy and distribute the book.