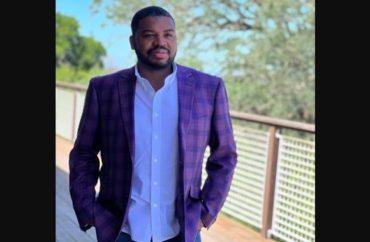 A political science professor from Stanford University recently compared the South’s “Lost Cause” to the so-called 2020 election “Big Lie” and January 6, 2021 “insurrection” at the U.S. Capitol.

The Lost Cause, NPR notes, is the “racist myth that justifies chattel slavery, [the] false story of generous slave owners and happy slaves” and the Civil War not being about slavery but states’ rights.

Like the Lost Cause, the “Big Lie” that Donald Trump actually won the 2020 presidential election is “a drive to protect a racist order” and “meant to justify — and at the same time deny the existence of — violence meant to preserve white power,” according to Professor Hakeem Jefferson (pictured).

That most involved in the Capitol riot were white means their actions were a “racial backlash … against the very perception of racial progress and the idea, unrealized though it may be, of multiracial democracy,” Jefferson said.

It is also about the power to tell a narrative of one’s self and one’s identity group […] The power some white people want to hold onto is a power of narrative.

Jefferson, who according to his Twitter bio “think[s] about identity, stigma, race, and politics more than any normal person should,” added that while “Americans are really responsive to the spectacular,” there are more “subtle […] incremental or seemingly legal” threats to democracy — all being pushed by the Republican Party. These include alleged “voter suppression” laws and the conservative bloc of the U.S. Supreme Court possibly making use of a “fringe legal theory” which would give state legislatures “control of elections.” 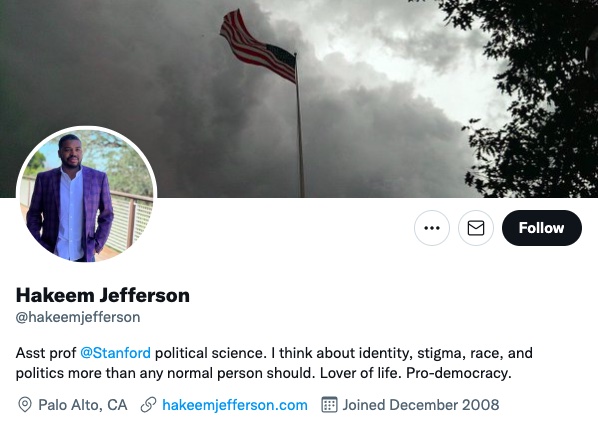 About year ago, Jefferson opined that white people’s resistance to wearing face masks was “crazy” and rooted in “whiteness.”

“Ain’t like masks are comfortable for non-white people,” Jefferson wrote. “But you don’t see a bunch of Black folks storming [school board] meetings. And it’s not just cause these white folks are GOP. It’s cause they’re white, & believe whiteness confers upon them a kind of power that places them above gov action.”

The David Horowitz Freedom Center took out a Facebook ad ripping Jefferson’s remarks, whereupon Stanford complained to Facebook and demanded it be removed. The social media company eventually complied, with Stanford President Marc Tessier-Lavigne saying “we deplore social media mechanisms that have the intent or effect of intimidating or silencing scholars.”

MORE: Race guru Kendi: Jan. 6 not a ‘national emergency’ only because white people were involved