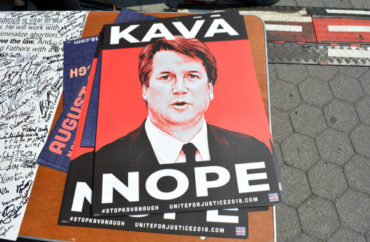 Waited until conservatives were gone to bring it up?

The debate over the nomination of Brett Kavanaugh to the Supreme Court has ended in the U.S. Senate.

It’s still going in the student government at the University of Wisconsin-Stevens Point, though.

Two days before Kavanaugh’s confirmation as a justice, the Student Government Association formally denounced U.S. senators for setting “an appalling precedent: credible accusations of sexual assault can be dismissed if inconvenient to those in power.”

Though it passed 14-0, the SGA resolution was voted on without the participation of three conservative senators, according to Amelia Heup, chair of the university’s chapter of the College Republicans.

Those three had “previous engagements and were not made aware of voting on the [resolution] letter until after it was passed,” Heup told The College Fix in a Twitter message. They only knew the letter existed “an hour before the meeting.”

The resolution had “no outside input from students,” and the vote was kept secret until her group publicly announced it had passed, Heup continued.

The university administration was caught off-guard as well. A spokesperson told The Fix it was not aware of the anti-Kavanaugh resolution and asked for a copy of the letter the SGA voted on last week.

One of the conservative senators who missed the unannounced vote is bringing the matter back to the SGA at its Thursday meeting, the senator told The Fix.

The letter’s partisan appearance is unacceptable for the SGA, and it must “retract their letter and rewrite the parts that are presumptive politically,” said the senator, who asked not to be named.

While Heup said a hard copy of the letter (below) was available to students in the SGA office the day after the vote, SGA did not share a digital copy until Tuesday – five days later – in a post on its Facebook page. 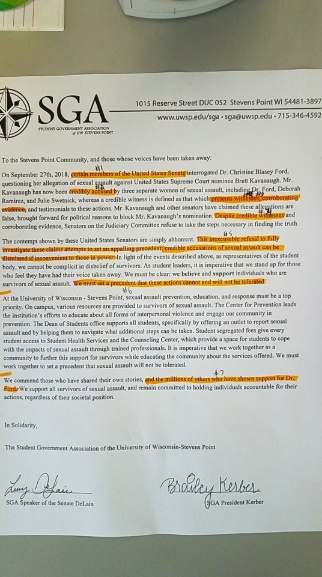 ‘We cannot be complicit in disbelief of survivors’

Though the SGA didn’t adopt the partisan tone of celebrities such as Billy Eichner in the resolution, its wording showed the same anger and sense of betrayal from federal lawmakers.

Members of the Senate Judiciary Committee “interrogated” Kavanaugh’s first accuser, Christine Blasey Ford, “questioning” her claims at the Sept. 27 hearing where they both appeared, the letter reads.

It continues that he has been “credibly accused” by three women with “credible witnesses and corroborating evidence,” yet Judiciary Committee members “refuse to take steps necessary in finding the truth.”

They showed “contempt” by refusing to “fully investigate” these claims, the letter says:

[A]s representatives of the student body, we cannot be complicit in disbelief of survivors. … We must be clear: we believe and support individuals who are survivors of sexual assault. We must set a precedent that these actions cannot and will not be tolerated.

The letter goes on to list campus resources for students who report sexual misconduct. It concludes that SGA “remain[s] committed to holding individuals accountable for their actions, regardless of their societal position.”

The UWSP College Republicans sent out a rebuttal of the letter Sunday, two days before SGA posted it, and announced it had held a vote without prior notice.

“This action taken by the Student Government Association is acutely partisan in an effort to support one political agenda, even though this organization is to be non-partisan and represent the entire student body,” the organization wrote.

It agrees with the message in SGA’s letter about supporting sexual assault victims and letting them know the resources available to them. But by withholding it from the student body, SGA “silenced” its constituents and imposed a “partisan take” on them, the College Republicans said.

In the statement, Heup accused SGA of conflating sexual assault on campus with the case against the Supreme Court nominee, which undermines “credible allegations and evidence from those who have survived this trauma.” 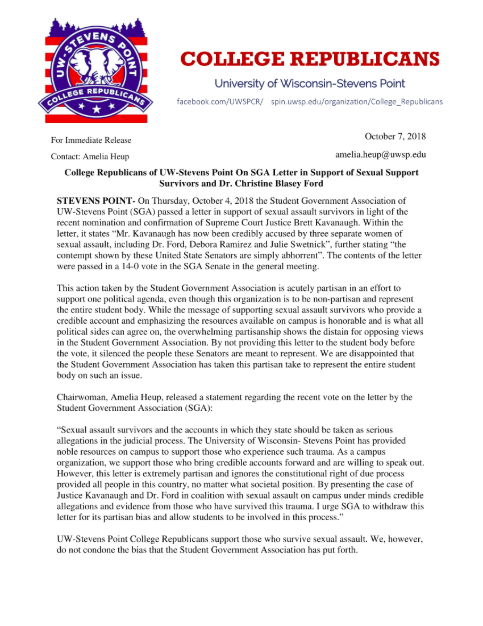 “When I first found out [about the letter] I was very disappointed,” the conservative senator told The Fix in a Twitter message:

I felt that the wording was very politically motivated. Bringing a contentious topic onto the table was an injustice to sexual assault sur[v]ivors because to many people all they saw was a continuation of the cumbersome political tensions.

It was also “too soon” to approve the letter as the official statement of the student government: “I believe the letter was written before the FBI discredited the claims towards the now Supreme Court Justice.”

The conservative senator plans to speak up for students who oppose the letter at Thursday’s SGA meeting, while also “protecting the voice of sexual assault survivors.” The student body must put the “ever dividing concept of politics aside.”

GRAB EVERY SINGLE PERSON YOU KNOW AND VOTE ON NOV 6th or in EARLY VOTING BEFORE NOV 6th. THIS IS NOT A JOKE. SUSAN COLLINS, WE WILL NEVER FORGET THIS, YOU TOXIC, SELF HATING REPUBLICAN CREEP. REGISTER TO VOTE HERE: https://t.co/NYjHB4FGTX