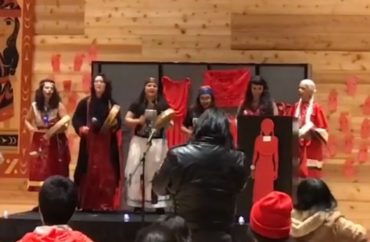 The University of Washington’s student government wants to see an American Indian enrollment quota of 24 percent by 2030.

The Associated Students of the University of Washington wrote a list of demands as a response to a professor in the Computer Science and Engineering department who refused to participate in a “land acknowledgment” requirement.

“I acknowledge that by the labor theory of property the Coast Salish people can claim historical ownership of almost none of the land currently occupied by the University of Washington,” Professor Stuart Reges wrote on his syllabus.

The ASUW wants to rectify the situation with a set of demands for the university.

It passed the resolution 50 to 1, although almost half the student senate did not vote. The one “no” vote, Austin Engstrom, said the  goal of “25%” enrollment is too high.

UW officials should “place an emphasis on hiring faculty focusing on the intersectionality of Tribal sovereignty and computing within the CSE department.”

One student sponsor, Madison Truitt, said the 24 percent quota could include “people of mixed race” according to the minutes of the January 11 meeting.

Associated Students of the University of Washington declined to comment on questions sent by The College Fix.

“At this moment, ASUW will not be commenting but in the future if we want to provide a comment we will most definitely reach out to you,” Communications Director Madi Welsh said in a January 31 email.

The Fix asked if the university had said anything about the resolution, what racial groups would see lower enrollment percentages to hit the Native American quota and for information on the tribal sovereignty and CSE professor request.

The College Fix asked if ASUW had a specific person in mind who could teach about the “intersectionality of Tribal sovereignty and computing within the CSE department.”

The Fix also asked for a source for its claim that the university has seen “an increase in harmful and racist actions by faculty towards BIPOC students, specifically towards Alaskan Native/American Indian students.”

The American Indian Student Commission, the sponsor of the resolution, did not provide comment to The College Fix, though it initially said it would.

The organization said it would participate in a Zoom interview but ignored several attempts to set one up in the past week or to send written responses. The Fix asked the same questions to AISC that were sent to the student government.