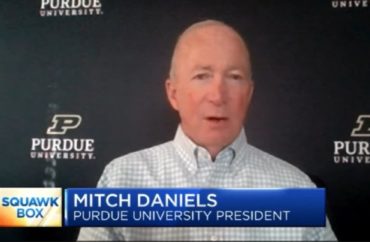 Mitch Daniels, a former Office of Management and Budget director under President George W. Bush, criticized the idea from the White House to transfer student loans to other taxpayers.

Daniels, a former governor of Indiana, said that most of the graduates at Purdue pay back student loans. Sixty percent of Purdue’s 2021 graduates ended school without student loans, a higher than average level.

Daniels said the administration knows that the executive order cancellation is flawed.

“One reason this has taken so long for the administration to say something about is they know it’s fatally flawed,” Daniels told CNBC on Tuesday.

“This is another very regressive suggestion, they’re going to give money to people making three times the national median average,” Daniels said.

“There’s just no way to present this, that it isn’t a giveaway to people who don’t need it and who freely took these obligations on,” the Purdue president said.

He called it unfair to the “millions of people who paid their debts back, 99 percent of our graduates at Purdue do pay them back.”

He said he is “not sure” what to tell those people who paid off their responsibilities “when other people are let off the hook.”

He also said the bailout is “flagrantly illegal” since President Biden is not going through Congress for new government spending.

A legal analysis from the Texas Public Policy Foundation concluded that it’s likely illegal for the president to transfer student loan debt through executive order.