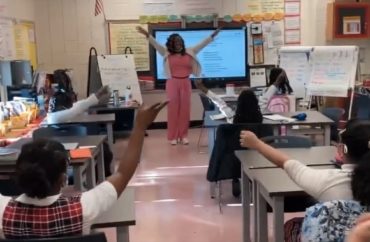 ‘I see a vice president that looks like me’

You know, of course, what would happen if an elementary school teacher led children in a chant congratulating President Trump on reelection?

NowThis transcribed the recitation and said it’s a version of a poem from a 2017 book by Chicago-area poet Leslé Honoré. It goes:

“While I may be the first woman in this office, I will not be the last- because every little girl watching tonight sees that this is a country of possibilities.” Vice President elect, Kamala Harris ❤️✊🏾

The recitation concludes with the children sticking up their arms: “Congratulations Kamala Harris!” The election results have not been certified, so referring to Harris as “vice president” and congratulating her is premature.

Also strange: why the teacher includes the final line about Queens, since the school is in Brooklyn. (The poem section of Honoré‘s website doesn’t include this poem to verify it’s referring to the New York City borough, as opposed to the casual use of “queens” to mean strong women.)

P.S. 399 is rated below average by nonprofit school rating service GreatSchools.org (though it misspells the school’s name).  Its students make average academic progress year-over-year but have lower test scores than the state average, and its disadvantaged students “may be falling behind other students in the state.”