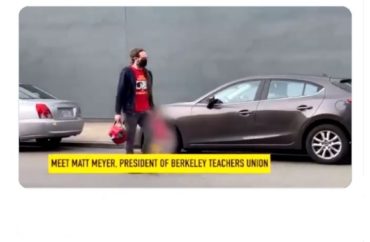 Remember the Chicago teachers union bigwig who defended school closures while wearing a bathing suit in Puerto Rico? We’ve got another one.

In Northern California, the same guy who has been claiming schools are too unsafe to reopen apparently doesn’t practice what he preaches.

A video posted by a Twitter account called “guerillaMomz” shows the president of the Berkeley teachers union dropping his daughter off at in-person preschool.

“Meet Matt Meyer. White man with dreads and president of the local teachers’ union. He’s been saying it is unsafe for *your kid* to be back at school, all the while dropping his kid off at private school,” the account tweeted Feb. 27 with its accompanying video.

The bio for “guerillaMomz” sums it up: “Momma wants her babies back in school.”

Meet Matt Meyer. White man with dreads and president of the local teachers' union. He's been saying it is unsafe for *your kid* to be back at school, all the while dropping his kid off at private school:https://t.co/BAIR5xH8LY#OpenSchoolsNow

Fox News reports a “group” is behind the video:

A group known as Guerilla Momz is calling Berkeley Federation of Teachers president Matt Meyer a hypocrite after spotting him dropping his two year old daughter off for in-person instruction at a private pre-school.

Meyer told FOX News in a statement that the video, which blurs out his child’s face, was “very inappropriate” and an intrusion of his child’s privacy. He added that there are “no public options for kids her age.”

“There are major differences in running a small preschool and a 10,000 student public school district in terms of size, facilities, public health guidance and services that legally have to be provided,” Meyer added.

Meyer said there is a plan in the works to reopen schools later this month. Still, it feels too little too late for many parents fed up with the situation. KQED reports:

The @guerillaMomz group declined to identify individual members by name, fearing retaliation against their kids at school. But they refuted that they scared his child, claiming they were walking quietly to avoid catching audio on the video they recorded.

“We’d heard for a while that he sent his kid to private preschool and we’ve been hearing him make crazy claims at the school board meetings — it was ‘too dangerous’ for schools to open because kids wouldn’t wear masks. Meanwhile, his kid is wearing a mask at school,” the group said in a written statement.

The “Reopen California Schools” Twitter page also got in on the action: 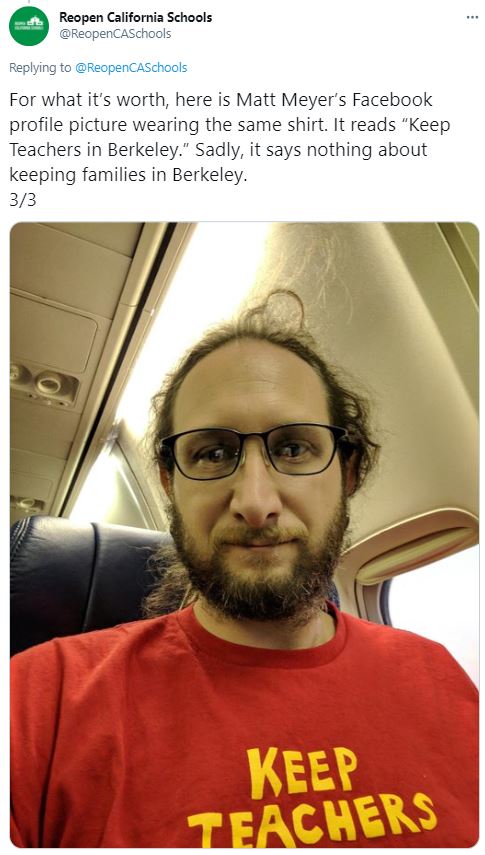 According to a Feb. 24 Yahoo news report, the situation at Berkeley is boiling over:

Last week, the Berkeley Unified School District reached a tentative deal with the Berkeley Federation of Teachers to reopen classrooms in a tiered rollout beginning March 29. That start date, however, is dependent on teachers and school staff receiving two doses of either the Moderna or the Pfizer vaccine.

The circumstances in Berkeley, and the earlier one in Chicago, continues to illustrate frustrations with teachers unions and their apparent hypocrisy amid COVID.

Earlier this school year, Florida teachers working remotely who argued they fear too much for their safety to return to work were reportedly caught on social media “partying, traveling and failing to wear masks.”