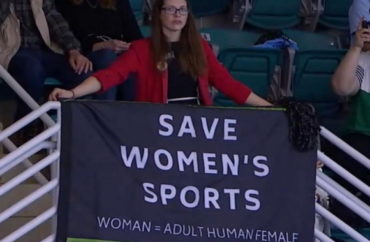 Despite the continued dominance of transgender ideology in academia and large swathes of the media, the response to Lia Thomas’ victory at the Women’s Swimming & Diving Championships indicates that some of its internal contradictions are causing it to be viewed more critically by a larger number of people.

By transgender ideology, I mean the dominant view that self-declared “gender identity” is what makes one a man or a woman or something else, and requires that one be treated that way in every single respect.

It’s likely that a minority of people will always have profound and lasting sexual dysphoria – or simply feel uncomfortable with the requirements or stereotypes that their sex seems to impose. This phenomenon is not new, nor is the effort by some to live and be recognized in a way that does not match their sexed body.

Even more, there will likely remain a tiny minority of biologically intersex people who cannot be neatly classified as male or female, based on genetic conditions (such as androgen insensitivity syndrome, in which a person has male DNA but develops female physical characteristics) that they did not choose and cannot change.

However, the current transgender phenomenon is novel. We’ve seen an accelerated rate of people, disproportionately teenagers, who claim a transgender identity. We also have a sex “reassignment” surgery industry that is projected to grow more than 25 percent between 2020 and 2026, according to Global Market Insights. These trends have been joined to a ruling philosophy declaring that a “gender identity” makes you a man or a woman, in every way.

But there are signs that this phenomenon is cracking at the seams. It is a product of our unique social and historical conditions, and its continuance is not inevitable.

Consider the case of Lia Thomas. The transgender athlete’s first-place victory in the 500-yard freestyle at the NCAA Division 1 Women’s Swimming & Diving Championships, following upon a season of record-shattering victories, has tapped into a lot of people’s intuitions that gender identity can’t negate biological sex.

Thomas, a biological male who formerly competed on the men’s team, has taken hormone suppressant drugs for the period officially required to compete as a woman. However, Thomas still boasts undeniable male physiological advantages that are relevant for sports, and indeed the very reason why female sports exist.

Colin Wright, an evolutionary biologist and transgender ideology critic, cited two academic studies, one from Sports Medicine and another from British Journal of Sport Medicine, to demonstrate that biological male athletes possess an undeniable advantage.

“These studies corroborated each other’s results demonstrating that hormonal suppression does very little to close the large performance gap between male and female athletes,” Wright said in a March 21 Substack essay.

“And, though it doesn’t really matter, the first author of the latter review is a trans woman.”

Wright, who had attended the event, reported the crowd’s positive reception to protests by Save Women’s Sports, a group that objects to the inclusion of biological males in female sporting events.

“What became apparent,” he wrote, “was just how many of those attending the swimming event supported SWS’s message.”

“Nearly everyone leaving the event who was offered a SWS sticker that read ‘SAY NO TO MALES COMPETING AS FEMALES’ happily accepted them. Many smiled and gave a thumbs-up.”

Wright also noticed how the crowd reacted to the announcement of Thomas’ appearance and victories, which “coincided with a very sudden and noticeable drop in the volume of applause.”

“The same drop occurred at the end of each race Thomas won. But the most dramatic drop of all occurred at the podium ceremony as the swimmers’ names were announced in reverse order, from third to first.”

The Daily Mail reported a similar phenomenon, writing that at the 500-yard awards ceremony, the crowd was “notably more enthusiastic when cheering for the woman who’d come second place — Emma Weyant, of the University of Virginia.”

Even Caitlyn (née Bruce) Jenner, whose transition from male to female seemed pioneering back in 2015, claimed that Thomas’ victory “wasn’t fair” and has repeatedly denied support for biological men in women’s sports.

I am eager and willing to work with members of Congress to put an end to this politically correct ‘woke’ madness! To protect the integrity of women in sport!

Inclusion is important and trans athletes need to be treated with dignity. But the core biological differences between men and women simply cannot be wished away, and when we’re talking about high-level competition, the unfairness is simply unmissable. Yelling TRANS WOMEN ARE WOMEN! will not persuade anyone, and it isn’t designed to. It would be wonderful if this were true in every respect, but it isn’t.

Philosopher Kathleen Stock, who has been vilified for her criticism of transgender ideology, put the issue more starkly:

Dear earnest, quasi-religious, progressive American Democrat types. I really don’t know how to break this to you, but I feel it’s best someone does. Here goes. (It’ll be ok.)

Technically speaking, there’s a man in that swimming pool.

The Pew Research Center released a survey in 2021 that found that “rising shares of U.S. adults know someone who is transgender or goes by gender-neutral pronouns.” However, another Pew survey published February 2022 study found “no public consensus” on transgender acceptance.

“At some point, and I suspect it will be soon,” Wright wrote, “the force of cultural pushback in response to the excesses of gender ideology will begin to prevail. People know what a woman is, and they also understand where the moral harm truly resides in this debate.”

“Stark absurdities, like what occurred at the NCAA Women’s Championships last week, will only fast-track gender ideology’s demise. Reality can only be warped so much before it eventually snaps back to reclaim its original form, and more and more people are everyday becoming privy to the destructive nature of the current gender madness.”