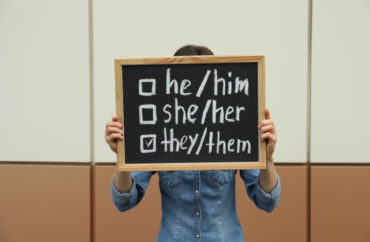 They’re written on name tags, sported on Twitter bios, mandated by language guides and used by at least one college mascot.

I’m referring to preferred, or self-chosen pronouns, and if you haven’t been asked for yours yet, you probably will be soon, Andrew Doyle stated in Unherd.

“Sooner or later,” he wrote, “your employer will suggest that you sign off emails with them, or announce them along with your name at the beginning of meetings.”

The same might be true for your university professor.

Not long ago, people seemed to get along fine with using “he,” “she” and “they” without prior permission or advice. Pronouns weren’t considered “mine” or “yours”; they were understood as a linguistic shorthand denoting our sex, which wasn’t usually hard to figure out.

Bespoke pronouns are now in vogue, however, because many want the concept of “gender identity” to replace sex as the determinant of whether someone is a man, a woman, or neither.

Here’s a definition of “gender identity” offered by journalist Helen Joyce in 2018: “an innate sense of being a man or woman [or neither] that usually, but not always, aligns with biological sex.”

Even more, there is a “deceptively simple, quasi-mystical idea,” Joyce stated, that everyone has a “gender identity.”

Joyce described this concept further as a ​​“radical notion” that is “sweeping across the Western world, with English-speaking countries in the vanguard.”

“The brainchild of a few sexologists, trans-activists and academics, it has spread via lobby groups and the internet, and on liberal campuses. It is now becoming consolidated in practice and codified into law, with profound consequences—not just for people who wish they had been born the opposite sex, but for everyone.”

“According to this theory, no one can determine a person’s gender identity except that person, and no one else can challenge it,” Joyce pointed out.

When you ask someone for their pronouns, as Andrew Doyle stated, “You are doing one of two things. You are either saying that you are having trouble identifying this person’s sex, or you are saying that you believe in the notion of gender identity and expect others to do the same.”

Mammals such as humans are usually good at inferring the sex of others, for good reasons. As evolutionist Richard Dawkins explained about lions:

When a male lion wants to mate, he looks for a female, for nearly every lion is a member of one of the two sexes. And since animals have no “social constructs,” their innate recognition of whom they should reproduce with is a sign of the objectivity of male versus female lions.

Our initial recognition of sex isn’t always right, of course. But the recognition of sex by observing secondary sex characteristics and other attributes is a valid, if not infallible, inference, just as it’s valid – but not foolproof – to infer that a man is married because he is wearing a ring on the third finger of his left hand, as philosopher Kathleen Stock writes in her book Material Girls: Why Reality Matters for Feminism.

So asking for pronouns probably doesn’t mean that someone doesn’t know your sex. Rather, it means that the person believes that gender identity, not sex, is what makes you a man or a woman – and since gender identity is internal, you can only know by asking.

“Gender identity” became normalized because it is a way to distinguish between the biological sex of transgender people and their internal sense that they are male or female.

But the idea that everyone has a “gender identity” isn’t a scientific concept. As Joyce and others have stated, it is a philosophical, quasi-religious idea promulgated by powerful groups.

As Doyle writes, it is “akin to a religious conviction, and we would be rightly appalled if employers were to demand that their staff proclaim their faith in Christ the Saviour or Baal the Canaanite god of fertility before each meeting.”

Moreover, he wrote, “declaring our pronouns has become the most common way in which we are expected to pledge allegiance to the new identity-obsessed religion that has captured most of our major institutions.”

Similarly, journalist Abigail Shrier stated that when you give “your pronouns,” you “participate in the catechism of Gender Ideology – the belief that there are ineffable genders, unknowable to all but the subject.”

So the next time a university language guide, professor, or student leader asks you for “your pronouns,” you might consider following Shrier’s model.

“Whenever anyone asks me to use their preferred pronouns, and I can do so without confusing my audience or muddying an argument, I do so and I think this is an important courtesy,” she said.

“But – when asked,” she stated, “I will not state my pronouns and if you don’t believe in Gender Ideology, you shouldn’t either.”

Instead, Shrier simply stated, “When asked for my pronouns, I say: ‘I am a woman.’”