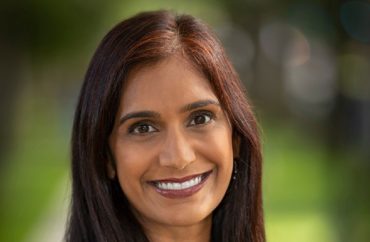 Forced to delete tweet: ‘Like the first time I got detention as a senior in high school’

It all started because of former U.N. Ambassador Nikki Haley’s middle name.

The former associate dean of Yale Law School, who is currently a senior lecturer in Yale’s Jackson Institute for Global Affairs, published the mobile phone number of a conservative student journalist after the Washington Free Beacon intern asked Yale for comment about the lecturer’s tweet criticizing Haley.

Asha Rangappa (above), who is also a legal and national security analyst for CNN, is director of admissions in the Jackson Institute as well. That means she could be subject to discipline under the lower standard generally applied to university staff, if not under the faculty code, for retaliating against a student.

She had mocked Haley’s claim at the Republican National Convention that “America is not a racist country.” Noting that Haley’s parents are Indian immigrants, the lecturer retweeted Haley with this barb: “Is that why you went from going by Nimrata to ‘Nikki’?”

Alex Nester’s report on the Yale lecturer’s tweet noted that Haley has gone by “Nikki” (“little one” in Punjabi) since childhood. The reporter also divulged that Rangappa goes by her middle name as well.

The lecturer’s first name, Renuka, is disclosed on what appears to be an old profile for Yale’s Office of International Affairs. It’s not on her Jackson Institute page or Rangappa’s independent personal website.

The Post Millennial speculated that Rangappa goes by “Asha” because it is “more easily pronounceable” than her first name, in contrast to Haley’s use of “Nikki,” which is both the name she has used for decades and a Punjabi term of endearment.

Right. Is that why you went from going by Nimrata to "Nikki"? https://t.co/buGFcY48gQ

Nester had asked both Yale and Rangappa for comment for her pending report. The lecturer, who has more than 600,000 followers, tweeted a screenshot of the Yale comment form submitted by Nester, which notes that Rangappa also goes by her middle name.

“So @FreeBeacon has now contacted my employer to BREAK THE STORY that I go by my middle name, just like Nikki,” Rangappa tweeted. “Because this is the important news during the RNC 😂 (Feel free to respond to Alex).”

Twitter required Rangappa to delete the tweet with Nester’s phone number even though the screenshot came from a “public-facing contact form,” the Jackson Institute lecturer and administrator tweeted late Tuesday. She accused Nester of trying to “Karen me at my job,” describing a reporter asking for comment with a slur for a white woman who harasses nonwhites.

“Getting a Twitter warning felt like the first time I got detention as a senior in high school!” she wrote, using two lighthearted emojis. She compared doxxing a student journalist to “going to Taco Bell with my best friend during study hall.”

Haley herself denounced Rangappa for “bully[ing] & attack[ing] a 22-year old just because [Nester] rightly called out her error” in attributing Haley’s use of “Nikki” to racism.

It is a disgrace that @CNN and @Yale promote someone who would bully & attack a 22-year old just because she rightly called out her error. I’m proud of @alexnester2020 for using the power of her voice & having courage to accurately report hypocrisy. https://t.co/8qcriZltc0

The Fix has asked media relations for Yale University, Yale Law and the Jackson Institute what sanctions Rangappa could face under faculty and staff codes for retaliation against a student, whose motivation appears to be causing intimidation and harassment to Nester. It also asked if Rangappa’s action would interfere with her return to the law school if she desired.

Nester’s summer internship at the Free Beacon was sponsored by the Student Free Press Association, the publisher of The Fix. The internship ended last week, before the kerfuffle with Rangappa. Nester’s next fellowship at the publication is sponsored by The Public Interest. She is a 2020 Hillsdale College graduate.