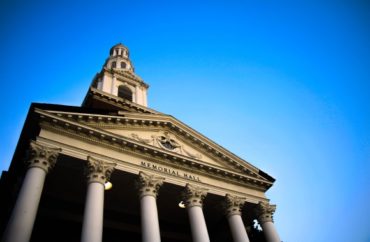 A large mural at the University of Kentucky painted by a female artist that has stood the test of time for nearly a century is slated to be removed due to complaints that it’s a painful reminder of slavery.

But the University of Kentucky now faces a lawsuit over the matter after it announced it would remove the fresco, described as the largest painted by a woman in the United States and one that “captures the pictorial and controversial history of Kentucky and is still considered one of the most important works of art in the state,” according to the artist’s supporters.

Painted in the mid-1930s, muralist Ann Rice O’Hanlon’s fresco includes stereotypical images from that era such as slaves working in a field, a point of contention among black students at the school who have decried its presence for nearly 20 years.

In 2015, it was covered up after a fresh wave of criticism from students.

In June of this year, in the wake of massive racial unrest in the country after the death of George Floyd, a black man, at the hands of police, University of Kentucky President Eli Capilouto announced the artwork would be removed for good.

The 40-foot mural is located in Memorial Hall, which hosts classes and events.

“There is rarely a perfect solution to challenging issues. But it is the right one, I believe, for our campus at this moment and in the years to come,” Capilouto stated.

In response, Kentucky historian Wendell Berry and his wife, Tanya Berry, the niece of O’Hanlon, sued the school. The lawsuit argues that because the artwork was commissioned by the New Deal-era Public Works of Art Project, it is owned by the people and cannot be arbitrarily moved by administrators.

What’s more, a 2018 mural created to serve as a companion piece to the 1930s-era fresco would be hurt by the older piece’s removal, some say.

The newer piece, titled “Witness” and located nearby to help ease the pain of the older images of slavey, “reproduces the images of the African slaves and places them in a gold leafed dome in order to elevate them to the divine and reinforce the notion or possibility of rebirth,” LEX18 reports.

Karyn Olivier, the black female artist who created “Witness,” told LEX18 without the older fresco “my piece becomes mute. It’s rendered void, in a way. It can’t work without the past it seeks to confront. That means my piece is just over. It doesn’t work on its own.”

She also said the university’s decision is misguided.

“The idea to remove the mural seems to me like a BandAid,” Olivier told LEX18. “It’s a quick deed to quell the fury and rage people are feeling.”

In President Capilouto statement, he had pointed out that the historical mural had long been a source of pain for some students and as the issue of race relations continues to be at the forefront of American politics, he wanted to remove the mural’s “weight” from the campus and its race-based discussions.

Capilouto stated that his decision to completely remove the painting from campus came after Floyd’s death. He stated that by seeing an unarmed black man being brutally killed, he sees how the mural brings to light the decades of suffering that African-Americans had to endure.

But Berry, who sued the university, argues that the removal of the painting and similar ones is censoring America’s history.

“I don’t think that the president has the right to destroy any part of the commonwealth. How soon do we get to the point where we just don’t want to have a past at all,” he told The New York Times.

When asked about the situation, the O’Hanlon Center for the Arts, which is an art center that was created by Ann O’Hanlon and serves as a tribute to her work, provided The College Fix with its public statement on the matter.

“Our understanding … is that Ann O’Hanlon’s 1934 mural will not be destroyed but perhaps moved,” the center stated. “As far as we know, the final decisions have not been made, and the university is looking at this mural in context of how facilities, art and education will work together to create a more understanding and racially conscious campus community.”

“We have asked for assurances from the University of Kentucky to recognize the significance of Ann O’Hanlon’s work, and as stewards, do all that is necessary to ensure its preservation either in its current locale or in another area,” the center added.

“We have also asked the University to entertain the notion of using Ann’s work as a catalyst for learning, education and understanding in regards to furthering deeper discussions of diversity, equity and inclusion while recognizing and respecting the difficult and controversial history of race in America.”

Asked about the mural, University of Kentucky spokesperson Jay Blanton told The College Fix “decisions have not been made at this point.”

“We have had an architect and a team from our facilities management area examining options but no final decisions have been made at this time,” he said.