Students at the University of Washington School of Law are not satisfied with diversity initiatives established by the university,  and they “continue to clash” with the dean about it.

According to The Daily, protesters, garbed in black clothing with tape over their mouths featuring the word “SILENCED” on it,  demonstrated in a law seminar to demand what by now is the usual: a “more diverse student body, faculty, and core curriculum.”

Ironically, the site of demonstration, the “Introduction to Perspectives on the Law” class, is where students learn about “the relationship between race, class, gender, sexuality, and the law.” 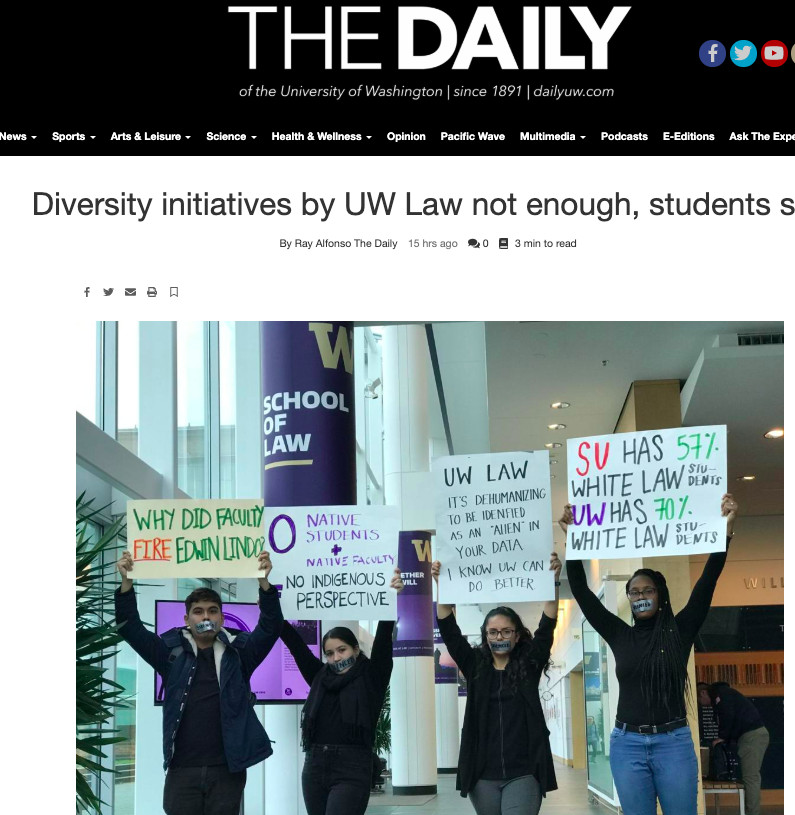 A few weeks after the in-class demonstration, a Daily newsstand was defaced with the message “WHITE LIVES MATTER MORE THAN ‘ANTI-RACISM.’ TRUST NO NEGRO.” The Black Law Students Association took to Facebook to note that “regardless of whether or not this act of violence was perpetrated by a law student, it is imperative that UW Law investigate the origin of this message and respond publicly to reassure students that this behavior is unacceptable” (emphasis added).

For some unknown reason, in this age of smartphone-originated instant news and social media postings, there is no photo of this “act of violence.”

The four students who organized the demonstration also felt like they were being ignored.

“I feel like what they’re trying to do is wait us out,” 3L student Karla Davis said. “They kind of relied on us not passing down what has happened already in terms of organizing to new students so that they can just pretend it was never an issue.”

In a typed letter addressing the students who organized the civil protest, the office of Dean Barnes cited financial challenges as the primary reason why they cannot hire any more tenured faculty, also stating that they cannot make race-based hiring or admissions decisions, per state law. …

The office of Dean Barnes further offered some changes to the Perspectives course. For example: Including a “much-expanded 3-credit version” of the program and having students choose from classes such as critical race theory, feminist jurisprudence, or poverty law.

But that isn’t sufficient, the quartet said. The fact that students can choose from classes “may result in [them] many avoiding crucial topics.”