An instructional designer at the University of Connecticut responded with a profanity-laced tirade after receiving a typical campaign email from a candidate in a local race.

“Fuck off you Republican cunt,” Betsy Guala replied to Melissa Ziobron, a GOP Connecticut State Senate candidate. “Your party ruined Connecticut and your party is ruining this country under that corrupt, lying, idiot Trump.”

According to The Daily Campus, Ziobron was in “a state of shock” when she saw Guala’s response.

“[W]hen I got that email, it was just very very upsetting. Somehow women with a conservative voice, whether it’s fiscally or otherwise, I feel like we’re treated differently and it’s very frustrating,” Ziobron said.

Blogger Kevin Rennie posted Guala’s email on his blog Daily Runctions. Ziobron says she does not know how Rennie acquired the message; she posited that someone to whom she had forwarded it may have sent it to him. 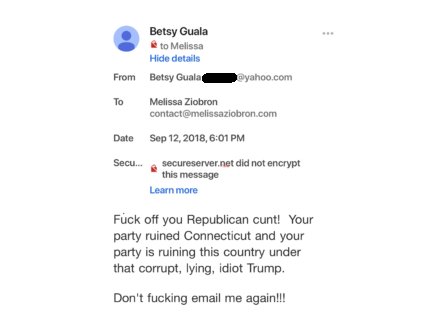 From the Daily Campus story:

Ziobron said that when the email first surfaced on Rennie’s blog, her campaign decided to respond to it online.

“At that point we had to make a decision whether to post about it on our campaign website,”

Ziobron said. “I felt that if I didn’t say something, having it hanging out there without comment from me would be bad.”

After Ziobron’s campaign posted a response to the email, Guala reached out to Ziboron and asked her to take it down.

“The author of the email reached out to me about six hours after I posted it on my website and asked that it be removed without offering an apology for what she said,” Ziobron said. “She apologized for her use of vulgar words but didn’t apologize for the sentiment. I understand how sometimes things can happen in the public view and I certainly didn’t ask for her to be reprimanded or something like that, but I didn’t get a sincere apology.”

Ziobron did delete her campaign’s response to the email, tweeting “I have removed the post regarding the nasty email at the author’s request. I hope to see a renewed commitment to civil discourse!”

You may have noticed in the screencap above that Guala’s email address is a Yahoo account. According to an email from university spokesperson Stephanie Reitz to The College Fix, “UConn has determined that the message was sent from [Guala’s] private e-mail account and was not sent on state time, and there is no evidence to suggest it was sent using state resources.”

She added: “As an institution of higher education, UConn works to promote civil dialogue and thoughtful public discourse on and off our campuses. We are obviously disturbed that one of our employees would choose to use language like this when corresponding with a public official, or with anyone for that matter.”

MORE: Prof gets reprimand for accidental email with word ‘penis’ in it