Bridgewater State University’s oversight board for research ethics is getting woke.

The IRB sparked outrage by approving a student-designed survey that asked hundreds of students in an entry-level psychology class to imagine the perspective of someone who opposes the Black Lives Matter movement.

Prefaced by a one-page disclaimer reviewed by The College Fix, the survey gave students a heads-up that it would delve into clashing political viewpoints. It imagined the phrasing that a BLM critic would use to argue that the movement was a threat to the community.

The survey asked students to come up with arguments that oppose the movement and the protests, riots and looting associated with some of its participants. One of the questions: “what does your community need to do to reduce the escalation of the Black Lives Matter movement?”

The student researchers used nearly the same wording in questions about COVID-19, according to slides provided by a university spokesperson.

In addition to imposing ideological conditions on the IRB’s work, Clark and Ismaili said they’ll ensure that the board observes “balanced representation of ethnicity and gender” as new vacancies come up.

BSU students protested the survey after student Jenna Higgins tweeted an image of a Black Lives Matter question Feb. 28, according to Newsweek. “So you guys just let your psychology students make surveys like this?” she wrote, tagging the university’s Twitter account. In another tweet, Higgins identified the student researchers who wrote the survey.

@BridgeStateU So you guys just let your psychology students make surveys like this? pic.twitter.com/S1mQTc6Yha

Less than a day later, the president and provost apologized to the community for the “harm and pain” caused by the survey and announced their solidarity with the BLM movement.

The “hypothetical vignette” that offended students was intended to “elicit predictable responses to better understand how differences in the framing of an issue shape opinions, beliefs, and reactions,” they wrote. The survey is no longer active.

A Bridgewater student told The Fix that his peers should “learn to defend even opposing viewpoints,” rather than complain about being exposed to them. This will give them a “better understanding of varying political perspectives.”

Bridgewater students are becoming “less and less tolerant day by day,” said the student, who agreed to be identified by his last name, Collins.

Even as Clark and Ismaili thanked students “for their vigilance” in flooding the university with complaints about the survey, they implied students should have read it more carefully.

The survey, “part of a larger investigation into pro and con reactions to issues such as COVID-19 and Black Lives Matter,” was “prefaced with considerable information about its purpose,” they wrote March 1.

It was developed for a class research project on “racial discrimination and bias.” The wording of the question should not be twisted into an endorsement of the anti-BLM view, the statement emphasized: “Both the researchers and the university strongly condemn the viewpoint articulated through the hypothetical vignette.”

“The survey is hypothetical and was approved by our IRB,” spokesperson Eva Gaffney wrote in an email March 9, promising to send the approval letter. As of Monday night, she has not sent that letter.

The disclaimer, provided by Gaffney, does not tell students exactly what the 20-to-30-minute survey is about, other than “teachers, schools, and your educational experience”:

You may benefit by learning valuable information about yourself, your habits and thinking, and will contribute to the study of psychological science.

It repeatedly emphasizes the survey is voluntary and students will not lose “any benefits” by not participating. The survey does not collect identifying information.

The disclaimer identifies the supervising professor, psychologist Elizabeth Spievak, but not the student researchers.

The spokesperson also forwarded an email from a marketing office staffer who said he was tasked with finding “screen grabs of the question(s) that may not have been discussed yet internally or externally.”

Four images were attached, two each for questions about COVID-19 and Black Lives Matter. Each subject started with either the “wild beast” or “open wound” phrasing (examples below). 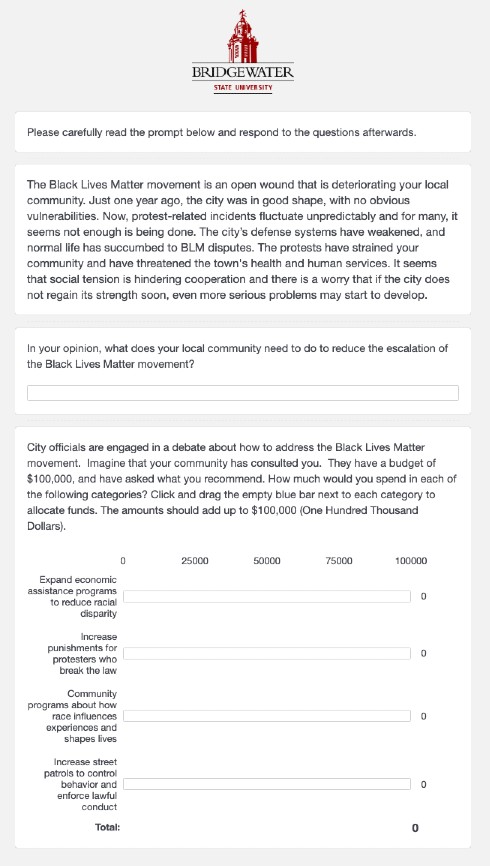 The marketing staffer said he found these four versions while taking the survey six times across multiple browsers and log-ins on March 3, when the survey was still live. He was never “prompted to log-in to BSU’s system to access the questions,” and “I am concerned there may be even more versions that I didn’t receive,” the staffer wrote.

“Just one year ago, the city was in good shape, with no obvious vulnerabilities,” said each version. (The Fix is depicting the COVID-19 version in brackets.) “Now, protest-related incidents [the spread of Coronavirus] fluctuate[s] unpredictably and for many, it seems not enough is being done.”

The city’s defense systems have weakened, and normal life has succumbed to BLM disputes [the virus]. The protests [Surges of COVID-19 cases] have strained your community and have threatened the town’s health and human services. It seems that danger lurks around every corner [social tension is hindering cooperation] and there is a worry that if the city does not regain its strength soon, even more serious problems may start to develop.

Each version concludes with an open-ended question about how students can “reduce the escalation [spread] of the Black Lives Matter movement [COVID-19].” They also ask students how much they would spend each on four categories to address BLM or COVID-19: expand economic assistance, increase punishments, community programs and “increase street patrols.” 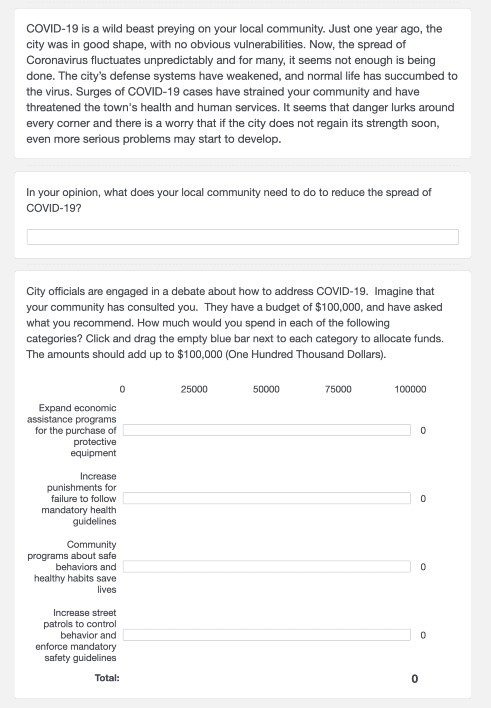 The university’s March 1 message to the community said it was already reviewing the survey. Bridgewater State “firmly stands with the Black Lives Matter movement,” the president and provost wrote.

They noted that the six-month-old Presidential Task Force on Racial Justice “will soon be presenting a series of recommended actions.” The survey’s approval raises the question of “how we advance the academic and research enterprise in a manner that is sensitive to the profound pain caused by racial injustice.”

The March 10 message emphasizes the university followed through on its promise to “actively and thoughtfully” review the board approval and faculty supervision of the survey. It’s even more apologetic, specific and full of adverbs than the March 1 message, swapping out “pain” with “trauma”:

On behalf of the entire university, we again apologize to each student, faculty member, librarian, staff and community member for the harm and trauma that the use of the survey vignette has created.

Clark and Ismaili portray the university’s review of the survey as part of its “antiracist” mission.

In nine days it has interviewed the student researchers, “[t]horoughly reviewed” the IRB approval process, convened the IRB twice and analyzed practices to “intentionally infuse racial justice strategies into university research protocols.” (Gaffney did not answer a followup query on whether those students are facing consequences for authoring the survey.)

The leaders also met with the psychology department chair, humanities dean and dean of students, and updated the racial justice task force on the survey review. They joined “small group meetings” with students of color “to process the anguish caused by this situation and to outline areas for immediate action,” and met with a black alumni group.

They reprinted a message to psychology majors from Chair Sandy Neargarder and psychology faculty. It reiterates that the vignette was “used as an experimental condition” to investigate “social justice issues,” yet it was posted across social media “without explanation or context.”

The department is “committed to creating a safe space for ALL our students,” the faculty wrote.

“It has been difficult to hear that despite our best intentions that some of you do not feel safe, heard, respected, or supported,” they continued: “No one involved in this incident intended to do harm, and yet harm is done every day by well-meaning people.”

The message implicitly scolds students for sharing the vignette online without context, rather than raising concerns in the department.

While faculty “need to be more mindful of how research questions are used in studies,” there must be “conversations regarding the most appropriate and productive way to communicate if something is offensive or hurtful,” so as not to “escalate and add to the hurt” students feel.

The incident has made the department “realize we need increased interaction/communication with students from diverse backgrounds” to share their experiences, “obstacles” and “hurt you may encounter” in class. It’s planning to convene a student forum on the subject.