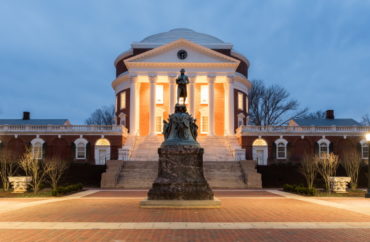 University of Virginia leaders’ stance to keep the school’s Thomas Jefferson statue despite protests and calls for its removal prompted some students and activists recently to hold a demonstration that bemoaned the decision and offered a chance to heal from and cope with it.

The late-October event, held at the statue, included speakers and writing exercises, and an emphasis “was placed on the need for community healing and mutual care. Speakers lamented the ‘mental, emotional and physical unwellness’ of students and urged students to ‘find time for joy,'” the campus newspaper the Cavalier Daily reports.

“We all have a responsibility to … unlearn the whitewashed history of this university and this country, and to free every single person who is oppressed and perpetually subjugated to the toxic systems of white supremacy, neoliberalism and racial capitalism,” one speaker reportedly said.

Another said, according to the student newspaper, that the university should be reframed as “Sally Hemings’ University,” alleging she was raped by Jefferson.

The event ended with chants of “This is what democracy looks like,” the Daily reported.

Following a statement by University President Jim Ryan affirming loyalty to Thomas Jefferson, students gathered around the Rotunda to reflect and advocate for the BIPOC communityhttps://t.co/7NvoHJl3Pa

It’s not unheard of for a university to remove from campus a statue of Thomas Jefferson, one of America’s Founding Fathers, lead author of the Declaration of Independence, and the third president of the United States.

Over the summer, Washburn University leaders quietly removed their school’s Thomas Jefferson statue from campus for fear of possible protests against it.

But removing Thomas Jefferson from the University of Virginia — which was founded by Jefferson — is still apparently a bridge too far, thankfully.

University of Virginia President Jim Ryan in early October told protesters and activists clamoring to have the statue removed that it’s staying put under his leadership.

“This statue, particularly in the last few years, has become a touchstone for concerns about the University’s complex history with regard to race. Some members of our community have called for the removal of the statue. This idea gained greater urgency in light of the recent protests across the country this summer,” Ryan stated.

“I do not believe the statue should be removed, nor would I ever approve such an effort. As long as I am president, the University of Virginia will not walk away from Thomas Jefferson.”

The university’s Board of Visitors approved a decision in September to put the statue in some sort of historical context “to tell the broader story about his contributions to the University, the nation, and the world, as well as contradictory writings and actions that were an integral part of his life and work.”

Ryan, in his statement, said that may be done “through a plaque or digitally,” noting:

It will not make judgments, but relay historical truths about his remarkable life, an effort consistent with our purpose as a University – to educate and pursue the truth. And, indeed, that was Mr. Jefferson’s admonition to us. Universities, he wrote, are “based on the illimitable freedom of the human mind. For here we are not afraid to follow truth wherever it may lead, nor to tolerate any error so long as reason is left free to combat it.”

But the statue is likely to continue to serve as a lightning rod on campus. In 2017, the statue drew a raucous campus protest during which activists called Jefferson a “racist rapist.” It was also vandalized.