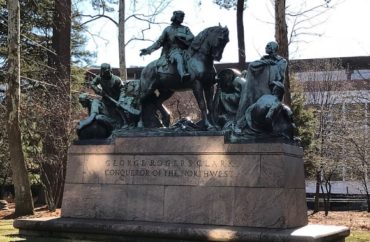 On the same day that the University of Virginia’s Board of Visitors endorsed a new statement on freedom of expression and freedom of inquiry, it also announced that it’s putting its statue of Revolutionary War officer George Rogers Clark in storage and erasing an inscription on its Whispering Wall.

The monument consists of a marble fountain and a wall with the inscription “a memorial to the honorable Frank Hume — a devoted Virginian who served his native state in civil war and legislative hall,” the Cavalier Daily reports.

A 2020 petition had called for the memorial’s removal entirely, arguing Hume was a white supremacist.

“If the University truly wants to atone for its past and ensure that its future is more just, more accepting, and more inclusive, the Whispering Wall will be taken down,” stated the petition, signed by over 2,100 people.

“The monument is a reminder of UVA’s racist, Confederate past, and tearing down the Hume Memorial Fountain signifies that UVA will refuse to participate in the racial fear-mongering that was the original intent of its erection.”

UVA announced on Friday that based on “the recommendation of the University’s Naming and Memorials Committee, the inscription on the Whispering Wall … will be removed and replaced with blocks of a contrasting color to mark the change.”

“It will also be officially designated as the Whispering Wall, which has served as its unofficial name for years.”

Campus leaders also announced that plans to remove the George Rogers Clark statue are in full swing. The decision to remove the statue was approved in September 2020.

A “request for proposal will be issued this month to remove the statue this summer and put it into storage as the University continues to work with Indigenous leaders to determine a suitable place for the statue off Grounds,” the university announced in its news release.

The statue has been accused of being oppressive toward Native Americans.

As The College Fix previously reported, the statue commemorates George Rogers Clark, also known as Hannibal of the West, for his accomplishments in expanding U.S. territory westward after leading militia efforts during the Revolutionary War:

Later on in the war, he would go on to devise a plan to capture British villages based in the region of Illinois, capturing the territory without firing a single shot, according to the 1896 book Conquest of the Country Northwest of the River Ohio. This victory granted him the title displayed on the statue, “Conqueror of the Northwest.”

Clark’s Illinois military expedition originated in orders from Jefferson, then governor of Virginia, who sent Clark westward to attack the British and their allies, as the petition touches on.

His post-Revolutionary activities included a 1790 effort to counter Native American invasions, which was ultimately abandoned due to a lack of resources, ending without a recorded victory, according to the 2014 book Hoosiers: A New History of Indiana, the state where Clark spent most of his years after service.

Clark is also the brother of William Clark, who made the expedition from Pennsylvania to the Pacific with Meriwether Lewis.

Removal of the Clark statue is expected to cost taxpayers $400,000, reports the Daily Progress.

For the past few years, the university has also been wracked by activism against its founder, Thomas Jefferson, with students vandalizing his monument and calling the American founder a “racist rapist.” Students and professors even demanded that its president stop quoting Jefferson in public.