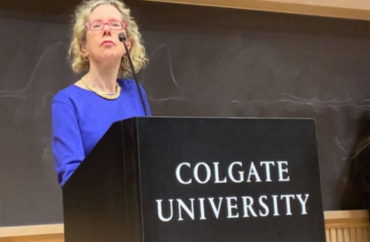 Heather Mac Donald stood at a Colgate University podium last Thursday night in front of a hostile, emotional audience who barraged her during a Q&A with highly charged questions after she gave a speech there at the behest of the school’s Open Discussion Club.

Mac Donald, author of “The Diversity Delusion: How Race and Gender Pandering Corrupt the University and Undermine Our Culture,” drew a protest of students who filled the auditorium making it so those open to the Manhattan Institute scholar’s views could not get in.

The plan among student activists was to listen to music with headphones or read a book by a “radical” during Mac Donald’s speech — then bombard her with hard-hitting questions during the Q&A, according to emails activist sent around before the event.

Perhaps the most tense moment of the evening took place when a woman took the mic to ask about campus rape culture, according to exclusive video obtained by The College Fix.

“In 2008 you wrote an article called ‘The Campus Rape Myth’ where you decided to claim that rape could be attributed to ‘sluttish behavior’ and that it’s women’s fault for getting drunk,” the question began amid applause, cheers and moans of shock from the surrounding audience, mostly students dressed head to toe in black to protest the scholar’s visit and views.

“You also said in a 2019 interview with the Hoover Institution that ‘all college-aged women can avoid 100 percent of so-called campus rape,’” Mac Donald’s questioner continued in an impassioned tone before dropping her bombshell:

“As someone who has been assaulted on this campus, do you believe that I am at fault?!”

The question drew a boisterous and prolonged round of cheers and applause that went on for roughly 30 seconds as Mac Donald stood at the podium and collected her thoughts.

Her reply showed that Mac Donald would not be cowered by the emotion and frenzy of the moment.

“Thank you for your question. And I do not know the facts of your incident and I am very sorry for what …,” but whatever she said next was once again met with loud gasps and groans from many in the crowd.

Mac Donald continued: “I have no idea what each party was involved with but I am sure it was traumatic.”

“Yes, it does,” Mac Donald responded, and affirmed it again amid more cries of shock. “I am not going to presume what constitutes an assault unless I know the facts.”

“Have you been raped? Have you ever been assaulted?” some called out.

The back and forth was one of many tense moments during a lengthy Q&A Mac Donald gave after her speech at the private, New York-based institution last week at the behest of the school’s Open Discussion Club. While she answered their questions dispassionately, the protesters often acted noisy, boisterous and incensed. 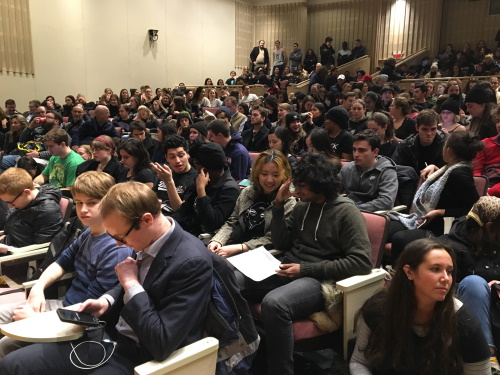 The activists had planned what they called a “nonviolent” protest in which participants first held a sit-in in the lobby leading to the lecture hall. For those who ventured into the talk, they “can be fully engaged in the speaker (though you probably won’t want to) or take out headphones, read their book, do homework, to disengage as the speaker is talking,” according to a copy of the protest email obtained by The College Fix.

During Mac Donald’s speech, a few students came to the front of the room and unfurled large banners, including one written entirely in Spanish and another that read “We won’t be silenced.”

A “debriefing and self-care session” was held after the talk, and the activists plan to “continue the conversation among students, faculty, and administrators at Colgate University about allowing speakers like Mac Donald to take up space on our campus unopposed.”

Mac Donald, in a statement to The College Fix, said her experience at Colgate was nothing new.

“My Colgate experience presented a more extreme version of something I have encountered in all the campus protests against me: the questions from the protesters in the hall invariably have nothing to do with my talk,” she said. 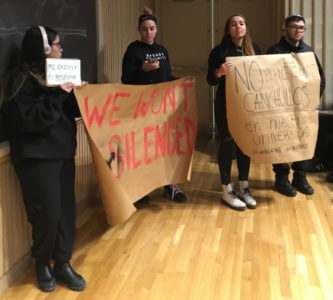 Mac Donald described the protesters’ suggestion to effectively cover their eyes or ears during her talk as “a stunningly apt emblem of the campus left’s rejection of dialogue.” She said many questions she fielded were from a cheat sheet of her writings prepared by protest organizers.

“Not surprisingly, then, the Colgate protesters’ questions were even more out of left field than usual: a large number focused on the post 9/11 war on terror, a subject I have not written about for nearly twenty years and that I certainly did not address at Colgate.”

“… This is campus rage manufactured in order to preserve the claims of victimhood.”

But the heated questions did not prompt Mac Donald to recant any of her previous statements. In fact, she also took on the ubiquitous 1-in-5 campus rape stat during parries with protesters.

“Let’s put that number in perspective,” she said. “… Our most violent city, Detroit, when you look at all four of the FBI’s violent index felonies — that includes murder, rape, aggravated assault and robbery — all four of those combined gets you a violent felony rate of 2 percent. So 20 to 25 percent [of campus rape victims] is a catastrophe.”

She continued that such a “sexual holocaust,” if it were really going on, would prompt a stampede of women away from college campuses, yet the opposite is true, females are now the majority on them.

Later, as she was questioned about the role of binge drinking in campus rape, she said “I actually believe women have power,” prompting another cacophony of cries from the audience.

“You don’t? You don’t think women have power to control the amount that they drink short of having someone pour it down their mouth?”

More cries, more groans, more jeers and angry chatter from the audience, prompting Mac Donald to say “I thought we were all strong women together. I thought the purpose was to recognize the autonomy of women over their fate and I would say that if you think that drunken parties are a high-risk rape environment, just avoid them.”

Again this prompted shrieks of outrage from the audience and accusations of victim blaming.

“I put female safety ahead of the principle of male fault,” she told the crowd.

“I don’t accept the proposition that every accusation of a crime is proof that that crime happened. I think, especially in this country, we should be very worried about false accusations of rape. … Something as serious as rape deserves proof. I think the presumption of innocence is one of the glories of anglo-American jurisprudence …”

In a second video of the Q&A obtained by The College Fix, Mac Donald again defended due process after she was asked how it feels for a woman to know she is not going to be believed.

“There are procedures that have been developed over the centuries,” Mac Donald continued as she was once again interrupted by a wave of angry chatter.

“Good luck if any of you are accused of a crime and you are not given the right of cross-examination, or you are not given the right of a lawyer,” she told the students. “You may right now trust the administration but you may be in situations where you are going to be very grateful for due process protections, because not all accusations in any area of the law are always correct.”

The tempest at Colgate represents the latest in a string of protests that have met Mac Donald on college campuses recently.