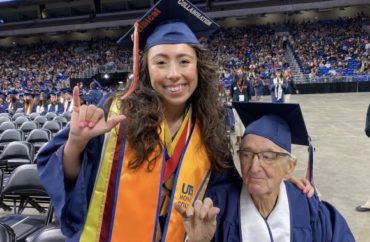 It is great to have grandparents at your graduation, but it’s even better to push your grandfather across the stage to receive diplomas together.

Neira is terminally ill and in hospice, but he was able to join his granddaughter at graduation.

“My grandpa has been in and out of school since the 1950s,” Salazar told The College Fix in a phone interview Tuesday. “His dream has been to earn his bachelor’s degree.”

Even though his health has declined, “me and my family [have] worked hard with the university so it could award him a degree,” Salazar said. “I’m just really thankful that I could share the memory with my grandpa.”

She called it an “honor” and “privilege” to push him across the stage.

“My grandpa and I just crossed the stage!!! He received recognition for his BA in Economics!” Salazar wrote on her Facebook on December 11. She is active in her Students for Life group and Catholic Student Association.

The university celebrated her graduation too.

“ICYMI: Something very special happened this weekend at UTSA Commencement. Rene Neira, 87, crossed the stage with his granddaughter, Melanie Salazar,” the university posted.

Neira is a few credits short of completing his economics degree. He dropped out of college in the 1950s to focus on raising his family.

Editor’s note: The article has been updated with comment from Salazar.