It should surprise nobody that one particular segment of the population to blow its stack at the U.S. Supreme Court’s overturning of Roe v. Wade on Friday … was academia.

It's a dark day for America. American Talibanism is here to stay. #RoeVsWade

Ayesha Ray, a political science professor at King’s College, said the decision means gay marriage and even interracial marriage are “on the chopping block.”

Ray also said she would “hate to abuse a woman,” but those who agree with yesterday’s SCOTUS decision are “testing her limits” (and used Rep. Marjorie Taylor Greene as an example).

I would hate to abuse a woman but man, this piece of scum is testing my limits. https://t.co/eTfo2yYsPt

The University of Miami’s Mary Anne Franks, who holds rather unique views of both the First and Second Amendments to the U.S. Constitution, claimed the SCOTUS majority “was careful not to cite” the real basis of the Dobbs decision: an almost-century-old case where it had approved forced sterilization.

Forced sterilization and forced birth are two sides of the same coin, and neither position regards women as people.

Bard College visiting professor Thomas Chatterton Williams tweeted out he is happy that his kids have two passports — because Friday was a reminder that “at any time a given country can roll back your rights.”

One of the things I’m most thankful for is that my kids have two passports. Today is a reminder that at any time a given country can roll back your rights, curtail your autonomy.

Respondents to Williams’ comments pointed out that 1) a person doesn’t need a passport to travel between U.S. states (as the SCOTUS decision doesn’t outlaw abortion but leaves it up to the individual states) and 2) the original Roe ruling made the U.S. an “outlier” compared to European countries as it forbade restrictions on the procedure that many of those countries maintain even today.

University of Chicago Pritzker School of Medicine dean Vinny Arora said she was “devastated” by the Dobbs decision and added (without irony) that she will not “pretend it’s OK” as “we are all only human.”

Ran into a student today who asked how I was doing.

I said I was devastated from the loss of reproductive freedom in the U.S.

They said they never thought they would see the day.
Me too.

As a leader, I am not going to pretend it's OK. We are all only human. 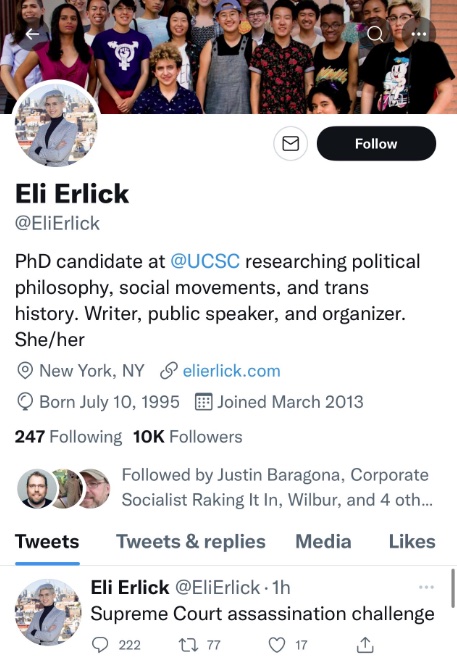 Anti-racism guru Ibram X. Kendi chimed in as well, claiming the Dobbs decision “rushes the nation toward an abyss where we have no civil or human rights.”

When women don’t have the right to make reproductive choices about their own bodies, we lose a foundational

right. When we lose foundational rights, all rights are threatened.

When all rights are threatened, low income women of color usually bear the brunt of it. And they will with this ruling. There is no separating the sexist and racist and classist aspects of this ruling.

There is no separating this ruling from a larger effort to crush our centuries of fighting for reproductive rights of women, for civil and human rights for us all.

The Court can crush Roe but it can not crush our resolve. This ruling has only inflamed our resolve.

And lastly, Rutgers’ own “Professor Crunk,” aka Brittney Cooper, referred to Justice Clarence Thomas as “this FUCKER” and said the SCOTUS is “trying to break our souls.”

SCOTUS out here trying to break our souls. Our resolve. Our collective will towards justice. I would like to triumphantly declare that they won’t do it. But today I can’t even say that shit with confidence.

Cooper added “the word she feels is rage,” and that one of her two (alleged) remaining “white evangelical friends” just came at her with “sanctimony.” She responded “Let me tell you who ain’t got the patience of Job ever and especially not today […] I said eff it and me and my girl rode out to the beach. I cannot with this day.”