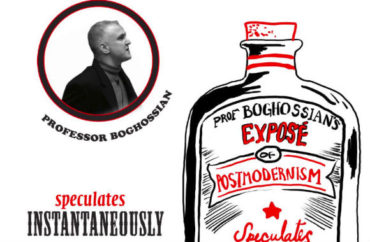 These ‘cowards’ might as well believe in Santa Claus, he retorts

The Portland State University philosophy professor would like to respond to their concerns in person, but he can’t.

The 11 professors and one doctoral student left their names off a letter to the editor published by the student newspaper Friday, while including their titles and departments.

“We have opted to communicate our concerns through a collective identity rather than individually,” they wrote in a disclaimer on the letter:

Boghossian has not only indicated his less-than-collegial attitude through his hoaxes, but has actively targeted faculty at other institutions. None of us wish to contend with threats of death and assault from online trolls.

Boghossian and his partners in the hoax project, which got seven papers accepted and four published, expressed their amazement at the anonymous hit piece in a video Sunday.

He twice refers to “the diversity board” – apparently PSU’s Global Diversity and Inclusion office – as an institution that may investigate professors who speak up in defense of Boghossian.

The professor told The College Fix he had taken great pains to engage critics, contrary to the anonymous letter’s portrayal.

When Boghossian moderated a discussion with the fired Google engineer James Damore earlier this year, he told the audience that all tenured and tenure-track women’s studies professors had been invited to “be with us tonight on stage” for a “conversation,” not a debate. The same invitation was available for a future event on intersectionality, he said.

In a phone interview Monday night, Boghossian compared this effort to having a conversation with someone who believes in Santa Claus.

These “cowards” are the “very same people who laud and champion diversity,” yet spurn one of the few heterodox voices on campus, he said: “I’m not a hardline dogmatist” and he’s never voted Republican.

He’s also not tenured, leading Boghossian to previously predict PSU will fire him.

It also failed to verify the accuracy of his partners’ names, referring to “Heather” Pluckrose, editor-in-chief of Areo magazine, and James “Lindsey,” a mathematician and author. Pluckrose’s name was corrected to “Helen” sometime Tuesday, but Lindsay’s name is still misspelled.

The anonymous colleagues are “obviously enraged at me” to the point where none of them caught the misspellings before submitting the letter, Boghossian told The Fix.

The front cover of @psuvanguard is also disgraceful. They portray @peterboghossian as a snake oil salesman. During my time there, I always thought it was inapprorpiate that a newspaper funded by student fees would be so ideological driven in one socio-political direction. pic.twitter.com/zcdqcLlOpG

The anonymous letter (print version, below) was signed by the “PSU Pro-Educational Editorial Collective.” It’s composed of seven professors and one PhD student in the College of Liberal Arts & Sciences, and one professor each from the School of Social Work, humanities, University Studies and Urban Studies.

Five have the title of assistant professor and two have associate, while three are full professors. One is simply identified as “Faculty.”

“Let us be clear. We’re not necessarily opposed to a well-executed hoax,” the letter says. But the first attempt by Boghossian and Lindsay – 2017’s “Conceptual Penis” paper  – was a failure because it was only accepted by a “generalist social sciences journal” that operates on a “pay to publish” model.

Their 20-paper project with Pluckrose, which convinced feminist journals to accept papers on rape culture in dog parks and a feminist version of Mein Kampf, was actively harmful because of the strain it put on unpaid peer reviewers, the letter says.

The anonymous scholars branded the trio a “clown car of hoax writers” who practice “the contemporary bullying style of Trumpist politics”:

We cannot conclude there was some kind of intellectual value provided by the non-research papers, but we can identify the drain on valuable unpaid time of real scholars these “hoaxes” directly produced. Some of your own professors are likely to be among those doing this unpaid work; this is part of the workload competing with their teaching and mentoring activities. 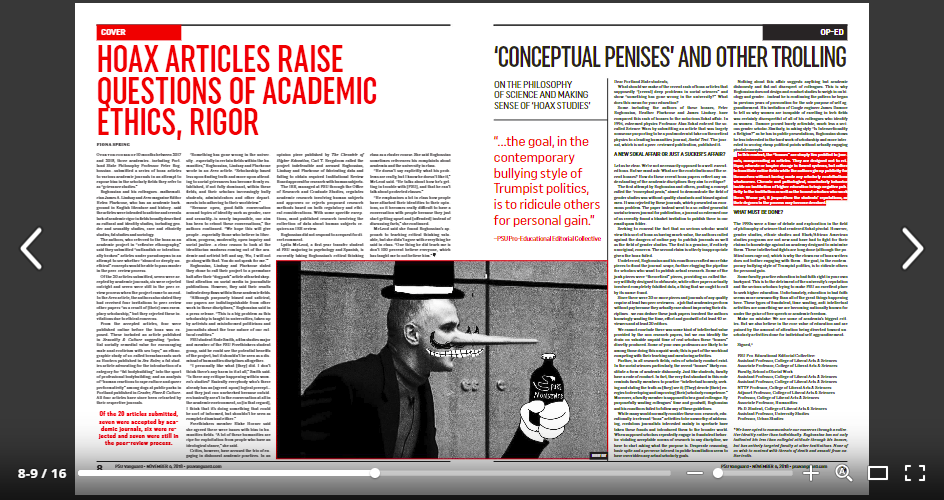 The letter personally targets Boghossian for “years of provocation for the sole purpose of self-aggrandizement” and his “[c]hronic and pathological, unscholarly behavior” at PSU.

Inviting Damore to campus “was certainly disrespectful of all of [Boghossian’s] colleagues who identify as women,” the letter says. It mischaracterizes the ex-Google engineer’s memo on gender and career-path choices as arguing “women are incapable of excelling in tech fields.”

By comparing intersectionality to a religion, “Boghossian shows he is less interested in the hard work of scholarship and more interested in scoring cheap political points without actually engaging pivotal concepts,” the letter continues.

The larger hoax project was intended to “humiliate entire fields while the authors gin up publicity for themselves without having made any scholarly contributions whatsoever,” the anonymous scholars write.

Boghossian has “jeopardize[d]” the future of PSU students, whose degrees “may become devalued” owing to the negative attention the school has drawn. The letter even goes after a local progressive paper for its “credulous” coverage of the hoax project:

Unfortunately, education in bad faith seems more newsworthy than all of the great things happening here. These types of fraudulent, time-wasting, anti-intellectual activities are something we are becoming nationally known for under the guise of free speech or academic freedom.

Only one comment had been posted to the anonymous letter by around 2:30 p.m. Eastern Tuesday, when The Fix contacted the Vanguard to inquire about potentially withheld comments.

Online Editor A.M. LaVey wrote in an email that was a function of his role, which only lets him moderate comments during office hours and not from home over the holiday weekend.

There were 25 awaiting moderation when he arrived Tuesday morning, and only one was rejected for being spam and none for “hate speech,” he said.

Nearly all the 26 comments now posted criticize the letter writers. A self-identified “female math undergraduate” said she had crossed off PSU as a potential graduate school, comparing the letter writers to “evolution denialists.” Another blasted the Vanguard for only letting through one comment in three days: “You aren’t hitting the ‘delete’ button on comments you don’t like, are you?”

Boghossian, Pluckrose and Lindsay appear in a video that documents their real-time reactions to the anonymous letter.

“So I get into work today and what do I see,” Boghossian says as he reviews the letter and the Vanguard‘s accompanying art, which proclaims he “speculates instantaneously.” He disputes the paper’s claim that he’s ever said “humanities are under attack by neo-Marxists.”

Boghossian laughs as he notices the letter writers are anonymous: “It is utterly incredible to me what the university has become … They can’t defend their ideas, they link me with Trump, they attack me as a person.”

The video then shifts to Boghossian on the phone with Pluckrose and Lindsay. “This is way worse than a hit piece,” Lindsay says, questioning the letter writers’ depiction of Damore as “barely articulate.” Pluckrose agrees, noting Damore is autistic and was “incredibly nervous” as he spoke before an audience that included vandals who damaged the sound equipment.

“Talk about wasting somebody’s time,” Lindsay continues, reading the portion of the letter about the strain on peer reviewers. “They wanted to make a graduate or undergraduate level course in masculinities based on the Hooter’s paper,” referring to one of the published hoax papers on “Breastaurant Masculinity.”

He defends the project as “an audit to raise the quality of scholarship coming out of shit fields” by professors who are “trying to turn [academia] into a cult.”

Mike Nayne, a filmmaker who has been documenting the trio, says off-screen with Boghossian: “You’ve just been written up in the ‘Mean Girls’ burn book.”

Boghossian says he’s not expecting sympathetic colleagues to write “another letter in support of me” because they are “too terrified … they’d be targeted and they could go up before the diversity board”:

“This is an inquisitional maneuver” by a group that “didn’t even do the slightest amount of their homework,” Lindsay says, noting the misspelled names. The trio “probably outpublished the whole lot of them in 10 months,” Boghossian adds, speculating on the anonymous scholars’ output. Pluckrose describes the letter as “incessant childishness and whining.”

Nayna asks Boghossian if the recorded phone call will “affect your job if we put this on the web?” He responds: “I don’t care. This has to be answered.”

You wanted us to actually examine 10,000 dogs’ genitals?

Pluckrose answered in her own magazine, marveling at how the Vanguard turned Boghossian into a “grotesque comedy villain.”

She told the anonymous scholars that “getting the names of the people whose work you are criticising wrong does not reflect favourably upon the depth of your research.” They also incorrectly credited the trio with comparing the project to physicist Alan Sokal’s 1990s hoax paper on quantum gravity as a “social construct.”

Sokal submitted a nonsense paper to show the problem with a particular (type of) journal passing through work they did not understand. None of the papers in the [trio’s] grievance studies probe do this, and it’s hardly complimentary to those among your own ranks to suggest they did. Rather, targeting only peer-reviewed journals, the papers in the Grievance Studies Affair draw extensively on the existing body of research to accurately extend or adapt its papers to make their own arguments.

If you haven't seen @hpluckrose respond to a cowardly and irresponsible anonymous attack on @peterboghossian by a "collective" of faculty members at Portland State (where Peter teaches), published in @psuvanguard, I highly recommend it. She's in top form.https://t.co/Z4JTBmMDhj

She challenged the scholars to read the peer reviewers’ glowing comments on the trio’s submitted papers, which clearly show “understanding of the academic disciplines they target.”

The scholars need to look at primary sources before they level accusations, Pluckrose repeated several times:

The papers in this project have been written clearly and should be quite comprehensible to a bright and engaged undergraduate. If the collective still finds the content difficult, it might need to go to the references cited and get a grounding in the kind of scholarship it is struggling with.

The scholars have given no evidence that the trio “falsified data” – a “legally specific claim” – yet they raise the question of how “extremely implausible data” was accepted so easily by several journals, Pluckrose wrote.

“If the authors had genuinely examined the genitals of 10,000 dogs, would this really legitimize a claim about the existence of a human rape culture, that dog parks and nightclubs are ‘rape-condoning spaces,’ and the advocacy of training men like dogs?” she asked.