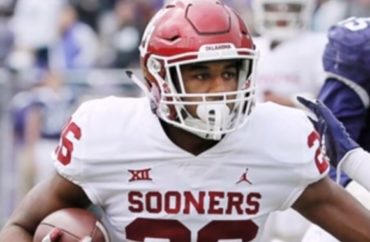 Even though Michigan State University initially exonerated Keith Mumphery of sexual-assault claims, the ex-football player still had to sue the institution for punishing him based on a double-jeopardy practice mandated by the Obama administration.

The university paid him $725,000 to settle, though Mumphery’s NFL career was interrupted if not foreclosed.

The University of Oklahoma’s Kennedy Brooks didn’t have to go that far, thankfully.

On Tuesday the university cleared the Sooners running back in a Title IX investigation spurred by a female student who claimed he was “physically violent” toward her, The Athletic reports, citing “multiple people familiar with the investigation.” She never reported the incident to police.

The report doesn’t provide more specifics of the accusation or Brooks’ response, except to note the investigation started earlier this summer and that Brooks stayed in Norman and trained at a local high school while suspended from the Sooners.

Brooks’ exoneration suggests the university had a weak case against him, and possibly a noncooperative accuser.

The standard of evidence used by OU in sexual-misconduct investigations is known as “preponderance,” meaning it was “more likely than not” Brooks is guilty, even if 49.9 percent of the evidence suggests he’s innocent. It was also mandated by the Obama administration.

Any lawyer that Brooks retained in the investigation would not be allowed to actively participate in any meeting or hearing, either, under OU rules.

A statement from the athletics department distanced itself from the investigation, saying it “does not participate” in reviews of a “potential issue” with student-athletes. But it “may elect to withhold” the student-athlete from participation during the review.

The department said Brooks is “expected” to participate on the team “later this week.”

According to The Athletic, Brooks was named to the preseason All-Big 12 team on Tuesday before he was exonerated. He was the team’s leading rusher last year.

Read the report (subscription-only on desktop, free on The Athletic mobile app) or a paraphrased version on Tulsa World.