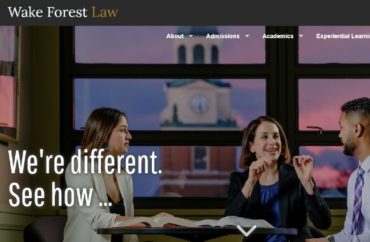 One of the most august historians of the First Amendment got in trouble last month when he quoted from a Supreme Court case that used the n-word several times.

Michael Curtis’s dean at Wake Forest University School of Law, Jane Aiken, denounced him to the whole community for using “the most offensive word in the American language” in the classroom. She apologized not just to Curtis’s students who heard it, but those in the community who heard of the incident.

Yet it’s Aiken who should be apologizing for scaring professors into worsening the quality of education they receive at Wake Forest Law, according to another First Amendment scholar.

He schools the supposedly intelligent Dean Aiken on the “use-mention distinction” and its defenders, including Harvard Law’s Randall Kennedy and Columbia linguist John McWhorter (both black). Some examples of cases where Volokh uses offensive words because that’s the whole point of the case:

Don’t even get him started on State v. Lenio, involving a rabid anti-Semite and every word choice that comes with that viewpoint. Volokh notes his Jewish heritage and his parents’ narrow escape from Nazis (“Nazi rhetoric and symbolism: Not my favorite”).

Volokh couldn’t even teach his constitutional law students about incidents from the past year if he were under Dean Aiken’s proscriptions at Wake Forest Law, including the prosecution of University of Connecticut students for shouting the n-word in a parking lot under a laughably unconstitutional “ridicule” statute.

Multiple cases in his First Amendment legal clinic “have involved the word ‘nigger,'” he writes:

First, the law school is part of a university, where we should try to discuss the world as it is, the evil as well as the good, whether in law classes, history classes, literature classes, or elsewhere. This strikes me as a fundamental feature of the modern university …

[O]nce a rule is set forth that you can’t use “nigger,” naturally people will assume that this reflects a broader principle. What about “fag” in “God hates fags” from Snyder or the other Westboro Baptist Church cases? What about swastikas or Confederate flags or “Negro,” in law school classes or history cases or other classes in which these are parts of the relevant materials? Normally, we expect students to accept candid discussions of awful things (and history and law are chock full of awful things). But once one word that bitterly insults one group is made taboo, it’s human nature for other groups to expect equal treatment for themselves.

If one word is so horrible it can’t be said out loud even as a reference, how do we even begin to talk about horrors beyond “racial hostility,” he asks: “Genocide. Slavery. Hitler, Stalin, Mao. Rape. Child molestation. Lynching.” (Indeed, some law students complain that they have to learn about sexual assault cases.)

Dean Aiken is not just theoretically worsening the education her students receive by threatening professors who quote from case law, Volokh notes, citing a moot-court incident from a “Top 20 law school.”

Administrators told students to remove “the most important precedent” from the subject matter of the competition because it involved cross burning, “which might be seen as too traumatic for some students,” Volokh writes. This means the students would be humiliated by the outside judges when they asked why the students left out the key precedent:

Fortunately, the decision was ultimately reversed. But this is where we go with the logic of compulsory expurgation of racially offensive material from sources that include it.

He goes on about the “extremely offensive material” that lawyers “of all races, religions, ethnic groups, and sexual orientations” have to hear every day.

Indeed, Aiken’s primary accomplishment with this infringement of academic freedom will be making Wake Forest Law grads worse lawyers in the field.