A Cornell professor’s email which asked for help in identifying maskless students who ate in his class — so that he could fail them — is causing an uproar.

The College Fix received a copy of Director of Undergraduate Studies for Earth and Atmospheric Sciences Bruce Monger’s message (below) which described one of the students as male with “pretty long” red hair and a “fairly prominent hooked nose.”

The other student, also male, had “short brown hair,” wore a gray hoodie and allegedly had his mask down around his chin for the whole class.

“If/when I find the identity of these two students,” Monger wrote, “I will be failing both for the semester as I promised I would in class last Wednesday.” 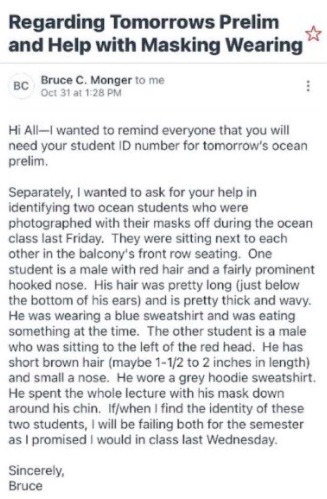 Thank you for bringing it to our attention. Here is our statement regarding Dr. Monger. pic.twitter.com/3eqfsvzNaI 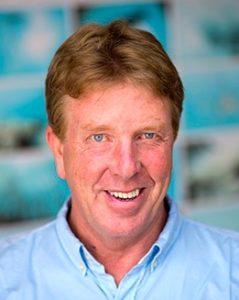 The university went on to note Monger’s (left) descriptions of the students did not “reflect Cornell’s values,” and that the professor acknowledged such.

Monger’s classes apparently are so popular, and the professor himself so mesmerizing, that three years ago a Cornell student credited such for turning him into a vegan and climate activist. The student was so devout, in fact, he ended up being arrested for occupying Nancy Pelosi’s Capitol Hill office.

In 2019, Monger was one of over 40 signatories to a letter addressed to New York Attorney General Letitia James asking her to investigate Cornell’s ties to the fossil fuel industry.

MORE: Prof who threatened to fail student for not trashing Trump removed from teaching