Boston’s all-girls Winsor School, where tuition is almost $54,000 per year, recently adopted a DEI — diversity/equity/inclusion — plan which will move away from references to gender.

According to Legal Insurrection, the school’s “Lift Every Voice” plan states that “although Winsor remains in its mission a school for ‘young women to pursue their aspirations and contribute to the world,’ the school recognizes the importance of inclusive language.”

This means transitioning from terms such as “she, her, hers’’ and “your daughter,” to “they, them, theirs” and “student.”

Faculty are “discouraged” from calling groups of students “ladies” or “girls,” and should address individual students by their preferred pronouns.

The Athletics department is revising its handbook to instruct coaches to avoid addressing student athletes in gender binary ways.

Departments have worked together to ensure that inclusive language exists in course materials created by the teacher. The English Department has agreed to a policy that prohibits the use of hateful language in any context. As stated in the Class I course description, “At times, our texts may contain racialized or hurtful language towards particular marginalized groups. Even if it is printed in our texts, we will not speak any hateful language in our classroom. Discussions are planned carefully, with a focus on understanding historical context and the role of antiracism, and they are handled in developmentally appropriate ways.” The department has also decide change the grammar curriculum and writing assessment criteria to accept “they” as a singular pronoun.

As another example, the science department lab and eye safety letter was updated to include nongendered language. All science faculty are encouraged to do so in course policies and expectations as well as any other course documents.

MORE: Dean urges students to use ‘freshmores’ instead of ‘freshmen’ for ‘inclusion’

Winsor Director of Community and Inclusion Julian Braxton notes on the very first page of the plan that he knew the school was “serious” about DEI work as far back as 1999: That year’s summer reader was “Why Are All the Black Kids Sitting Together in the Cafeteria.”

“We had something at that time called Community Curriculum Day, which was a day devoted to talking about some diversity and inclusion issues,” Braxton, then a Winsor history teacher, said. “The topic was white heterosexual privilege— and that was another example of Winsor being willing to have difficult, uncomfortable, important, challenging conversations.”

Despite the language efforts, the Winsor Twitter account still says it is “an independent day school for girls in grades 5 through 12″ (emphasis added). 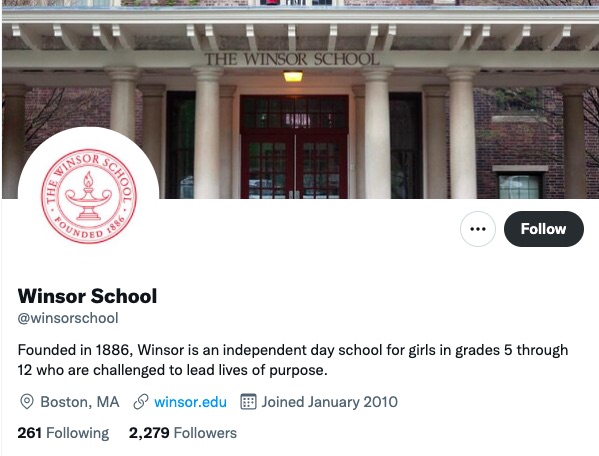 Legal Insurrection notes Winsor’s website also still uses “girls” (there’s no less than eight mentions of the word) which indicates the school “still wants the reputational benefits of being labeled an ‘all-girls’ school, as internally it seeks to do away with ‘girls’ as a term.”