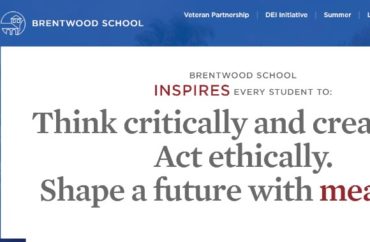 ‘Minority communities don’t ask for this kind of segregation’

Brentwood School was in the national news a couple years ago because a female teacher was accused of sexually preying on male students.

Now the elite private school in Los Angeles, with a reported tuition of nearly $38,000, is bragging about something it should also be ashamed of: racial segregation.

It’s not just separating the races from each other at the same “Dialogue & Community-Building Sessions,” part of its yearlong initiative on diversity, equity and inclusion that started last month.

Brentwood is hosting completely different virtual meetings by race and ethnicity over the next two months.

They start later today with six meetings for faculty, staff and “parents & families.” Whites and blacks have their own meeting in each cohort. Parents and families for “Hispanic & Latinx” (woke whitespeak for Latino) and “Asian & Asian American” follow on Wednesday.

Hispanic and Latinx faculty and staff and “Multicultural & Multiracial Parents & Families” meet Feb. 8. The most marginalized group in the school appears to be Jews, since Jewish parents, families, faculty and staff are all relegated to the same meeting, also that day.

Faculty and staff, alumni and trustees “of color” – those who don’t fit the nonwhite racial and ethnic categories – each have their own meetings as well.

Lest you think this segregation only applies to race and ethnicity, non-heterosexual faculty and staff, parents and families, and alumni all have their own meetings.

The registration pages (faculty and staff, families and alumni and “Parent Affinity Groups, Trustees, Committees and Councils“) emphasize that the sessions are intended to “establish a safe space for important dialogue with one another around topics relevant” to diversity, equity and inclusion.

While they claim “[e]verything shared will be held in strict confidence,” the registration pages instruct participants to turn their video cameras on “if you are physically able to do so,” as well as unmute their microphone at least to introduce themselves and also send chat messages.

The school does not appear to vet who registers for the meetings, only asking for names and email addresses of any kind. It does not require a Brentwood email address, for example.

Another user claimed this was the project of “white liberal elites,” because “minority communities don’t ask for this kind of segregation.”

Turns out I was wrong all this time; white people *are* racist. Seriously, minority communities don't ask for this kind of segregation; it's always the white liberal elites who dream this garbage up. https://t.co/YV5CrjfveH

Read the DEI initiative announcement and schedule for the segregated sessions.