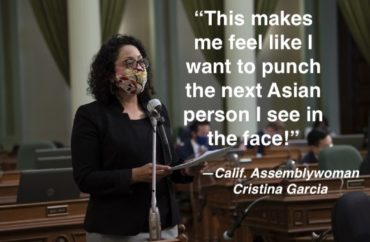 The No on Prop 16 campaign is fighting to protect California’s ban on racial preferences in public college admissions, but Facebook isn’t making it easy.

On Wednesday the social network removed a post by Californians for Equal Rights, whose tagline is “Keep Discrimination Illegal,” that highlighted “an egregious, racist comment made by a Democratic state lawmaker about Asian Americans participating in the political process,” a spokesperson for the group told The College Fix in an email.

The image in the post (above) shows a recent photo of Assemblywoman Cristina Garcia with a quote attributed to her from 2014: “This makes me feel like I want to punch the next Asian person I see in the face.” (A onetime national #MeToo leader, Garcia is better known for multiple allegations of sexually harassing men that led her to take a leave of absence.)

“Who’s the real racist?” the post text says. “Please LIKE and SHARE if you reject racism.” (Asian-American activists are a prominent voice in the No on 16 campaign.)

An administrative alert from Facebook, visible only to the page’s managers, says the post violates “our Community Standards on hate speech” and it would be hidden from the public, according to a screenshot from Kenny Xu, the Californians for Equal Rights spokesperson. 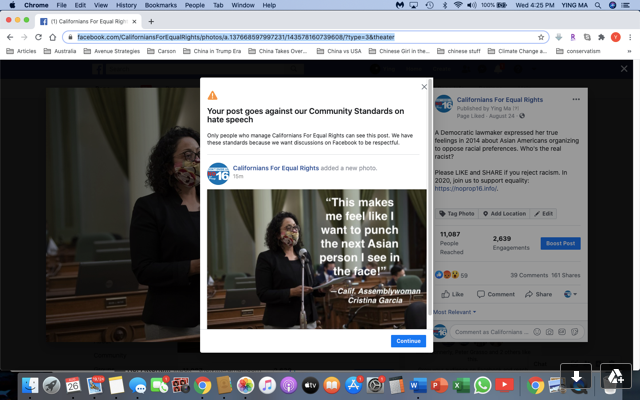 The post doesn’t include the context of the quote, but the spokesperson attributed it to a Politico report in 2018 following the sexual harassment allegations against Garcia.

Sources familiar with the incident say Garcia’s anti-Asian remarks came during a legislative battle that arose when Asian-American community activists successfully lobbied to defeat a Democratic proposal to overturn California’s ban on affirmative action in college admissions. They argued that such a move could hurt Asian student admission rates.

Perez in mid-March 2014 announced a move to return the bill to the Senate without any action from the Assembly, effectively blocking its advance.

Garcia, the sources said, erupted in anger during a tense meeting of the entire Assembly Democratic caucus.

“This makes me feel like I want to punch the next Asian person I see in the face,” according to sources present at the meeting and other legislative sources who were told about the comments in the immediate aftermath.

Proposition 16 would repeal Proposition 209, the state’s 24-year ban on government institutions discriminating on the grounds of race, sex and ethnicity in employment, contracting and education.

It was placed on the November ballot by the Legislature earlier this summer, using the legislative vehicle known as ACA-5. Opponents accused Democratic lawmakers of using the fog of the novel coronavirus to rush through the repeal attempt this spring.

“There is no place in modern America for the type of racism exhibited by” Garcia, “who is one of the primary champions of the restoration of racial preferences in California,” Xu said. “There is also no good reason why Facebook should be labeling targets of racism [Asians] as perpetrators of hate speech.”

While Facebook restored the post after the campaign appealed the removal, it has “enormous power” to “censor or silence ordinary Americans advocating for their political beliefs” by virtue of its “ubiquity,” he said.

The social network should not “shut out” the voices of first-generation Asian-American activists such as him, “even if real racists advocating for racial preferences threaten to punch them in the face,” Xu said.

After her return to the Assembly, Garcia tried to ban Teach for America from putting teachers in California classrooms, claiming it would hurt low-income and minority students. Nearly half of TFA’s teachers identify as minorities.

MORE: Garcia tries to block Teach for America from California