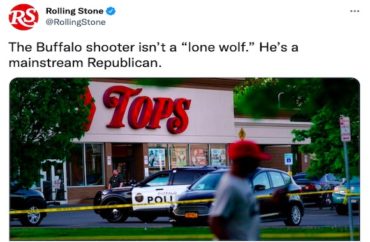 A former New York University adjunct and writer for The New Yorker recently penned an article for Rolling Stone claiming the Buffalo, New York mass shooter is a “mainstream Republican.”

Talia Lavin (pictured) who resigned from the New Yorker after falsely claiming an ICE agent had a Nazi tattoo — and was snapped up by NYU a few months later — claims “right-wing extremists who control the modern GOP are all gripped by a racist delusion. The [Buffalo] shooter is just the latest to act on it.”

The focus of Lavin’s NYU course was “reporting on the far right.”

Eighteen-year-old Payton Gendron stands accused of killing 10 people this past weekend, all of whom were black. He allegedly published a manifesto prior to the shooting stating he wanted to emulate 2019 New Zealand mass killer Brenton Tarrant.

The mainstream media, which so far haven’t posted the full manifesto online, have zeroed in on Gendron’s fascination with so-called “great replacement theory” and critical race theory. NBC News notes Fox News’ Tucker Carlson has mentioned the former (which posits whites in the U.S. are purposely being supplanted by minorities) and claims the latter is a “recent right-wing talking point.”

However, reporters on social media allegedly caught a glimpse of the manifesto and noted Gendron had stated he was a Communist at age 12, and subsequently “moved farther to the right.” He currently identifies as a “mild-moderate authoritarian leftist,” rejects Christianity and doesn’t like Jews. 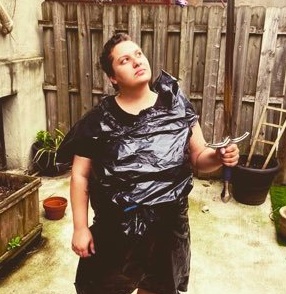 Lavin writes “There’s no such thing as a lone wolf — an appellation often given, in error, to terrorists who act alone, particularly those of the white supremacist variety. There are only those people who, fed a steady diet of violent propaganda and stochastic terror, take annihilatory rhetoric to its logical conclusion.”

The Republican Party’s embrace of nativism has been more of a full-on dash than a slow slide, and it has been catalyzed by the vast constellation of right-wing media. Chief among these is the juggernaut that is Fox News. As a New York Times analysis revealed, the network’s flagship prime-time show, Tucker Carlson Tonight, has an obsession with replacement theory: In more than 400 shows the newspaper analyzed, Carlson evoked the idea of forced demographic change through immigration and other methods. Carlson is not alone: A Media Matters examination of Fox’s rhetoric throughout 2021 found that the network fulsomely embraced replacement theory, or, as it is more commonly known among extremists, “white genocide.”

Rolling Stone tweeted out the following:

Between her stint at The New Yorker and NYU, Lavin joined Media Matters for America to report on “far right extremism.” The NYU gig proved rather ephemeral as a grand total of two students signed up for her course … and hence was cancelled.

MORE: Adjunct furious at article on cancelation of NYU’s ‘Reporting on the Far-Right’ course