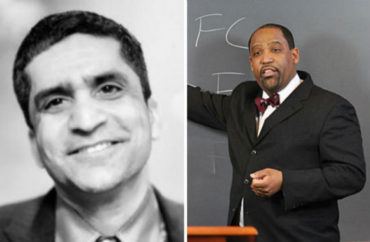 No explanation from Harvard

Sullivan’s sin, in the eyes of #MeToo student activists, was representing the disgraced media mogul Harvey Weinstein in his criminal trial.

Khurana’s investigation was the first such action against a faculty dean in Harvard’s history, leading the African-American Sullivan to claim it might have something to do with his race. The Harvard Black Law Students Association made the same claim.

But the dean wasn’t done. Khurana attended a “Reclaim Winthrop” sit-in against Sullivan by activist groups on Friday, The Harvard Crimson reports.

It wasn’t clear why Khurana was there – for “part of the event,” the Crimson specified – and Harvard did not respond to a College Fix email asking for an explanation. But it will certainly be interpreted by the activists as support for their cause, to remove Sullivan as faculty dean:

Our Harvard Can Do Better — an anti-sexual assault advocacy organization — read a list of demands at the event, including calling on the College to publicize the results of a climate review of Winthrop House and to create a system to hold faculty deans accountable. They also demanded that Sullivan apologize to house affiliates and delegate his ceremonial duties during Commencement to “an alternate,” and called for an “end to intimidation tactics.” …

The Association of Black Harvard Women and Student Labor Action Movement also sponsored the event. Our Harvard Can Do Better member Remedy H. Ryan ’21 wrote in a text that 178 undergraduates put their names on a sign-in sheet the organization distributed.

One of the sitters, Winthrop student Hakeem Angulu, said they don’t dispute that Weinstein deserves due process but insist that “Sullivan does not have to provide the representation, and by providing, he is compromising his ability to serve survivors and his house.”

Sullivan’s decision to represent Weinstein has set off far-flung conflict at Harvard, including between its residential communities and even between the Crimson and Sullivan.

One of the leading activists against Sullivan is a Crimson staffer, Danu Mudannayake, a resident of Eliot House. The British student of Sri Lankan origin designed and posted anti-Sullivan flyers throughout Winthrop that some students found racist.

She accused a Winthrop House tutor, Carl Miller, of spying on her in the Winthrop dining hall. Miller and his wife Valencia, also a tutor, claim Mudannayake harassed them and their infant child. They filed dueling police reports against each other.

Mudannayake’s faculty dean at Eliot, Gail O’Keefe, accused the Millers of acting “totally unprofessionally and dishonestly” by filing the police report against her resident. The Millers sued O’Keefe for defamation, also claiming she made false statements about why the couple left Eliot House before moving into Winthrop.

The Crimson has been subpoenaed by the Millers’ lawyer for its communications with Mudannayake and O’Keefe and others “concerning” the Millers. Echoing Sullivan’s criticisms of bias by the Crimson, the lawyer accused the newspaper of a “campaign of disinformation and bias” against his clients.