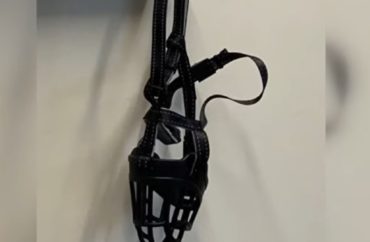 Michelle Fiscus claims her card was stolen, but police say the case is closed

A former Tennessee public health official who claimed someone threatened her by sending her a dog muzzle likely bought it herself, according to the results of an investigation.

Michelle Fiscus denies she bought it herself and claims her credit card information was stolen, but police have closed the investigation.

Fiscus, the former vaccine director for the Tennessee Department of Health, said she received a dog muzzle (right) in the mail in early July before the state terminated her.

Fiscus’ LinkedIn said she is an “associate clinical professor” of pediatrics at a children’s hospital affiliated with Vanderbilt University Medical Center. She is not currently listed as a faculty member there, however.

“She is not listed in our directory,” Craig Boerner, a Vanderbilt spokesperson, told The College Fix on Tuesday morning. “I do see that she did her residency here at VUMC.”

She is not currently involved with the children’s hospital, Boerner told The Fix, and she is “not an employee of Vanderbilt University Medical Center,” though he confirmed her academic title listed on her LinkedIn. Her description on the career website does mention that she is looking for a job in D.C. and the media has reported that her family is moving to Virginia.

Fiscus told multiple media outlets, including CNN, that she received a muzzle, likely due to her statements on vaccines. Fiscus had told other state health officials that teens could receive vaccination without parental consent under existing state law.

A report from the Volunteer State’s homeland security department “found through a subpoena that the Amazon package containing the muzzle traced back to a credit card in Fiscus’ name,” Axios reported.

The news site did not link to a copy of the report but the department provided The Fix with a copy.

It shows that Paul Peterson, with the health department, reported the matter for investigation on July 7. On July 1, an American Express card with Fiscus’ name on it ordered the dog muzzle.

“At this time, there appears to be no threat” toward Fiscus, investigator Mario Vigil wrote in his August 16 memo. The department said the case is closed.

She stands by her claim that she is a victim

Fiscus denied she sent herself the muzzle.

“Regarding the muzzle: I ASKED Homeland Security to investigate the origin,” she tweeted. “Just provided a redacted HS report by Axios Nashville. Report says a second account was made under my name from a phone in WA? Waiting on unredacted report. Hold tight. No, I didn’t send it to myself.”

Regarding the muzzle: I ASKED Homeland Security to investigate the origin. Just provided a redacted HS report by Axios Nashville. Report says a second account was made under my name from a phone in WA? Waiting on unredacted report. Hold tight. No, I didn’t send it to myself.

According to the Nashville Post, a memo from the Tennessee Department of Health said it terminated Fiscus due to a number of conduct problems.

Chief medical officer Tim Jones said Fiscus’ problems included, “alleged failures to maintain good working relationships, claimed her leadership and management of the state’s vaccine program was ineffective, and accused her of seeking to divert state funding to a nonprofit she founded to support Tennessee’s Vaccine-Preventable Diseases and Immunization Program,” according to the Post’s summary.

The Post did not link to a copy of the actual memo.

While Fiscus claimed she was threatened for her pro-vaccination of kids stance, the police report only provides two emails as evidence of communications she received.

One on June 23 said that Fiscus overstepped her authority and mentioned a conflict of interest, since Fiscus’ husband Brad is on the Williamson County School Board, though he plans to leave that position with the family’s move to Virginia.

Another email, while boorish, did not include a threat of violence or harm.

“I am putting you on notice that we will be holding you accountable for any adverse effects or deaths on children [due to vaccination],” the email said. It also told her to “lose some weight” to “[s]et the example” of how to stay healthy.