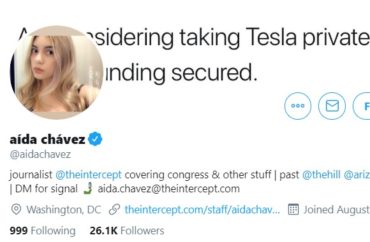 In some ways it was easier to be a reporter before social media became inescapable. When I joined my first professional newsroom, Twitter was still a year away from existing.

That meant it was much harder to demonstrate your personal bias in a way that the audience could see. In contrast, reporters now have minute-by-minute opportunities to turn off the audience and harm their credibility.

Some of their media organizations are wary of this temptation, and seek to instill in them the virtues of restraint and fairness in their social media usage. They may have been instructed this way even earlier, in their journalism programs.

The Cronkite School at Arizona State University has a social media policy for this very reason. But one of its students really hated it – and waited three years to make it go viral.

The State Press at ASU reports on the fallout for the Cronkite school from being named and shamed by an alumna, Aída Chávez, who now works for the left-wing “adversarial journalism” outlet The Intercept.

Late last month she shared an email from 2016 from an unidentified Cronkite School staff member that scolded her for continuing to post “inappropriate tweets.”

At the time she was working in Washington for the school’s Cronkite News program, which airs on Arizona’s PBS affiliate, according to the Press.

The email said she had been warned at least three times about tweets that violated the J-school’s rules on social media usage for student journalists, which were laid out on the syllabus, at orientation and in the early days of “boot camp.”

The tweet that got Chávez rebuked implied that her father had illegally crossed the border and “I wouldn’t be here” if he hadn’t. She tweeted it during “an immigration speech by a presidential candidate,” the email read, referring to then-candidate Donald Trump’s speech in Phoenix two months before the election.

wait since we’re on the subject, remember the time my journalism school wanted to kick me out of their DC program for tweeting that my parents are immigrants while I was an immigration reporter pic.twitter.com/qgcXhpUGHX

“A news reporter in Washington working for an organization that is trying to fairly cover a variety of issues cannot post a pro-immigration tweet during an immigration speech by a presidential candidate,” read the email. “The tweet would not be appropriate regardless of the timing.”

Chávez’s participation in the Cronkite School is conditioned on her compliance with its policies, specifically that she “be an impartial reporter and follow the ethics and guidelines of our syllabus and newsroom.”

Her actions illustrate a “direct challenge” to program directors in Washington and Phoenix, the email continued: Students who violate the social media rules will get a lower grade and may be removed from the program “in egregious cases.” She did not post the end of the email on Twitter.

Chávez construed the email as saying the Cronkite School “wanted to kick me out of their DC program for tweeting that my parents are immigrants while I was an immigration reporter.”

She told the Press that journalists “as a whole” who contacted her about the email were “kind of universally appalled at the email.” Chávez said she received “a lot of heartbreaking stories” from Cronkite School students of color, mostly women, who have received similar warnings.

It’s “antiquated” to believe that expressing personal opinions on subjects of coverage on social media may “ruin your career” after graduation, she said.

The Cronkite School defended its policies, telling the Press that “journalistic impartiality, especially in today’s media climate, continues to be an important journalistic standard.” It teaches students to separate “professional and personal lives” as a matter of practice for working journalists.

Its social media policy tells students to “avoid posting information to social networking sites or blogs that could call into question your ability to act independently as a journalist,” including their “political views.”

The former executive editor of Cronkite News, Kevin Dale, responded to Chávez in his own tweet thread. (The Press said he had sent the email.)

“Here’s what did not happen: no one was threatened with expulsion for merely tweeting that they were from immigrant grandparents,” wrote Dale, who is currently executive editor of Colorado Public Radio:

[The J-school] was trying to teach students how to live as journalists on social. The rules written out at that time were very strict in hopes of preparing them for their future newsrooms – most of which would have ethics codes involving social media. …

Several students would get warned each semester, usually by the social media director. Multiple violations resulted in escalating warnings. Disagree with the policy, if you like but it was set out in the syllabus.

@cronkitenews was trying to teach students how to live as journalists on social. The rules written out at that time were very strict in hopes of preparing them for their future newsrooms – most of which would have ethics codes involving social media. 4/8

Dale also said the percentage of journalists of color at Colorado Public Radio had doubled since he arrived nearly two years ago, and continues to grow. Responses to his thread were largely contemptuous, and some were profane.

The response of Chávez and her supporters is likely the default among her generation of journalists, I would guess. They have been sharing their opinions on public digital platforms since childhood and see no reason to change their behavior when they grow up, valuing authenticity more than professionalism.

It’s the reputations of their organizations that suffer. As fair-minded reporters leave their ranks, those who remain are ever more shrill and openly contemptuous of opposing views.