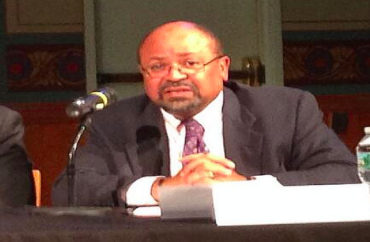 Trinity College sociology professor Johnny Williams is the gift that keeps on giving, so to speak.

In an end-of-February op-ed in the Hartford Courant, Williams says white people preside over an “oppressive system,” and when people of color “refuse to abide” by this system, they’re accused of “inciting hatred and violence.”

The professor is referencing the controversy following comments he made about the shootings of GOP congressman Steve Scalise and others three years ago. Williams wrote that, in whatever predicament you may find them, “let [white people] fucking die” … and to “smile a bit” when it happens.

The professor was suspended for his comments, but cleared of wrongdoing shortly thereafter.

He’s since gone on to say calls for “civility” merely serve to “uphold white supremacist heteropatriarchal capitalist power,” and that “‘White’ kneegrows really need a lot of therapy and a good ‘ol [sic] ass kicking.”

Such are merely “accusations” of inciting violence, Williams writes in the new op-ed, because he “dare[s] to name and write about the sources of racially oppressed people’s suffering — whites and their system of white racism.” He claims Trinity College suspended him because it was afraid students would hear “the [re: his] truth.”

Whiteness is a shared conglomeration of fabricated meanings and ideas about biologically insignificant human differences. Whiteness only exists in relation or opposition to blackness and other fictitious racial categories created by whiteness adherents for the purpose of cementing a higher status and material advantage over other people that are excluded from being white. …

[…] [C]ontrary to my critics’ beliefs that whiteness is merely an identity — race and whiteness materialize as systemic white racism terroristic actions and practices with very real, tangible, and lethal effects.

Whiteness often goes unnoticed by self-identified whites in ways that divert them from considering their complicity in the daily white terrorism — wars, police and military occupations, poor housing, health, and education — directed at racially oppressed groups. …

Whiteness by its very definition and operation as a key element of white supremacy kills; it is mental and physical terrorism. To end the white terrorism that is directed at racially oppressed people here and in other nations, it is essential that self-identified whites and their whiteness collaborators among the racially oppressed confront their white problem head-on, unencumbered by racial comfort.

Like a true sociologist, Williams also subscribes to the school of thought that “only those with power” can be racist, and that racism is not a disease merely infecting individuals — it’s systemic and widespread.

MORE: Journalism over profs’ provocative statements a ‘technique of repression’