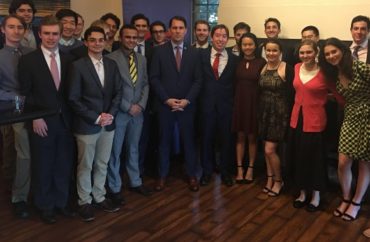 Joked about controversial shooting in Kenosha

Stanford University students have complained to campus officials through the school’s “Acts of Intolerance” system after a conservative group at the school sent out an email that joked about a controversial shooting.

Stanford College Republicans found itself in the crosshairs for making a joke about Kyle Rittenhouse, who is charged with murdering several protesters in Kenosha, Wisconsin.

Rittenhouse traveled to Wisconsin from Illinois to help defend businesses during riots that followed the shooting of Jacob Blake by Kenosha police.

College Republicans at the private university in California sent an email to its contact list on September 22, promoting a Second Amendment workshop hosted off-campus by another group, according to The Stanford Daily, the student newspaper.

A version of the Google sign-up form asked “Did K*le R*ttenh**se do anything wrong?” and included options such as “No,” “Yes. He tagged #3 but didn’t bag him” and “Decline to answer without a lawyer present,” according to The Stanford Daily.

That drew the ire of activists on campus who reported the form as an Act of Intolerance and reported the College Republicans.

But the university has yet to move on the report, according to Sills.

Sills told The College Fix via email that the university has not reached out to him yet and said it’s possible they are “too afraid to do so.”

Stanford’s media relations office did not respond to multiple emailed requests for comment from The Fix on the Acts of Intolerance nor any complaints against College Republicans.

The CRs criticized the original complaint on its Facebook page.

The Acts of Intolerance are “a flagrant violation of the First Amendment Right of Stanford students” and do nothing but “appease the ravenous leftist mob on campus,” the group said.

“We firmly stand by the First Amendment Rights of our members against this mob justice.”

University officials updated the reporting system around the same time that College Republicans sent out the email about the gun workshop.

Vice provosts Emelyn del Peña and Mona Hicks released an updated policy and system on September 28, though Sills told The Fix that the Acts of Intolerance are not themselves new.

The officials said that in their recent working group meetings, they found “[m]any students would like there to be a punitive process for an AOI.” The school will not punish students, but accused students or even student groups can be called in for resolution.

Anyone can report anyone else using the form, and reports can stay anonymous. People can also upload photos or videos of the incidents, too.

Resolutions include “mediated conversation” or a “restorative justice session,” according to the dean of students website.

MORE: From the campus to American culture: Bias reporting spreads to Yelp

The updated system drew criticism from Nicole Neily, the president of Speech First.

The new policy is “deeply concerning on a number of levels” Neily told The Fix via email.

Particularly, the broad definitions include “asserting that ‘jokes at a party’ or ‘insensitive’ comments on social media” are intolerant, Neily said.

Further, the definition “encourages students to view conflict where it might not truly exist” which “unnecessarily inserts the university into interpersonal relationships.”

Because reports will be addressed on a ‘case-by-case basis,’ there’s a clear implication that reports can (and will) be referred to other departments for further investigation and possible punishment. And although the school asserts that participation by a ‘responding party’ is voluntary, this ignores the power dynamic that exists between an accused student and university administrators.