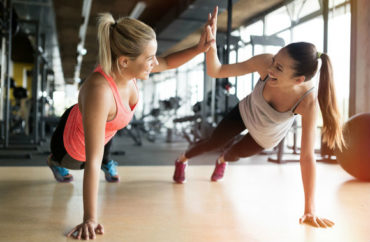 But segregation in the name of safe spaces has become popular on the political left, and one UT student is proposing a separate campus space for women to get exercise.

“Oftentimes, it can be difficult for some female students to go to the gym” because it “can be seen as an overly masculine place, and women may feel alienated or intimidated as a result,” Nayak wrote.

It wouldn’t be the first time a college has restricted workout space on the basis of sex or gender identity.

Last year Stanford University offered “women’s only training” two days a week in a campus gym, including for men who identify as women. It added male-focused gym hours after The College Fix reported on the exclusion of men.

Pitzer College excluded men for a few hours on “Women and Non-Binary People’s Gym Day” last spring, and reportedly got the idea from Canada’s University of Manitoba.

A professor who has repeatedly challenged sex-segregated practices on campuses across the country told The Fix that “a single-gender, female-only space at a public university is illegal, and would not survive a legal challenge.”

The university quickly disavowed that it was considering a women-only space in Gregory Gym or even that students had formally requested such a space.

Spokesperson J.B. Bird told The Fix that UT “respects the rights of all of its students to exercise their First Amendment rights and make their personal opinions known, but there is nothing under consideration. Other than this op-ed, the university has not heard anything on this matter.”

Though the university is planning to renovate Gregory Gym by the end of this semester, the renovations will pertain to updating lockers and won’t involve any new rooms or centers, according to the Daily Texan.

‘Women should not have to feel judged or awkward’

Columnist Nayak seemed to be unaware that UT once had an historically female-only gym, named after physical education professor Anna Hiss, which opened in 1931.

It’s not clear when the gym closed, though it hasn’t been tagged in a Facebook post for more than two years. Most recently it served as an intramural sport and recreational activity center for several years.

Nayak faulted UT for lacking “an amenity that many other gyms guarantee — a women’s center,” though she didn’t cite any other college that offers a male-free space.

The university must “take into consideration ways to make women more at ease,” she wrote. “Women should not have to feel judged or awkward when trying to exercise because of inexperience or clothing, and UT should ensure female students feel more comfortable in generally male-dominated settings, such as the gym.”

It’s not enough that a female-only residence hall has a workout facility, and it “would not be a difficult task” to set up a women’s center at Gregory Gym, Nayak wrote:

A center such as this would simply entail sectioning off a room at the gym equipped with weights, a few treadmills, machines and mirrors. Existing equipment could even be moved or any new funding could be prioritized to buy new equipment for a women’s area.

She interviewed another student, Annabelle Furrh, who said women can “feel intimidated” to lift weights in mixed company, “as weightlifting is seen as a thing men do,” and worried that men would leer at women working out in “leggings and a sports bra.”

Furrh said she and other women would probably use the gym more often if it had a space where men were excluded.

Nayak doesn’t clarify whether her proposed women’s center would be open to transgender women or would exclude transgender men. (A women’s college in Missouri recently changed admissions policies to only allow self-identified women.)

The columnist also doesn’t explain how it would be feasible under UT’s discrimination policy, which bans “unlawful discrimination” on the basis of sex.

Grace Nardeccia, a second-year corporate communications student at UT, told The Fix in an email that the arguments in Nayak’s column were “valid.”

It has been “intimidating going to the gym when there were a ton of men always watching,” and “some women feel” this intimidation “more than others,” Nardeccia said.

But she hadn’t previously considered “the effects of Title IX, and [now] recognize how such a center could cause issues,” she wrote. Creating “individual centers” would benefit certain parties but “muddy the issue” legally, and would prove challenging for “economic” and “limited space” reasons on campus.

“Title IX prohibition against sex discrimination (including against men) and UT’s statement of non-discrimination would have to be amended and weakened to legally allow a women-only, no men allowed space on the campus of a university,” he wrote in an email. “That is not a likely option or outcome.”

It would also “have to offer separate, but gender-equal spaces or hours in the Gregory Gym,” giving men equal “size and equipment” in a space that bans women, he claimed.

“If a women’[s] center is established, it will immediately face a legal challenge, either by me or somebody else.”

Perry is nationally regarded as someone who can make such threats credibly. When Stanford introduced the women-only workout hours – at the behest of an inclusivity committee that claimed women “didn’t feel comfortable in large gym spaces” – a male student asked for Perry’s help drawing attention to it.

The student filed both internal and Department of Education civil-rights complaints against Stanford for the women-only hours, and the administration quickly added male-focused workout hours.

The UT women’s center proposed by Nayak would immediately face questions about access for a wide range of students who do not identify with their birth sex, Perry told The Fix.

About the Author
Ethan Berman
Ethan Berman is a senior at the University of Texas-Austin. He is studying Radio, Television, and Film production, getting a minor in Hebrew, and hopes to study law. His work and content have been featured on InfoWars. When he isn’t writing articles, he works as the head writer for Sneak Peek, the longest-running show on the FCC-licensed Texas Student Television.