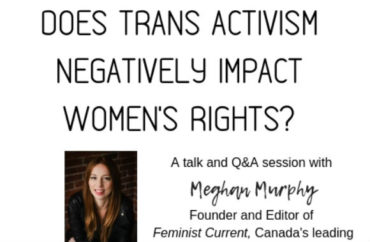 ‘They gave the invoice’ with no explanation

One of the largely ignored angles in transgender news coverage is the opposition of some feminists to the claims advanced by transgender activists.

The Canadian public university slapped a student group with $8,000 in security fees in order to host an event titled “Does Trans Activism Negatively Impact Women’s Rights?”

The Laurier Society for Open Inquiry, founded earlier this year by free-speech activist Lindsay Shepherd, said in an email blast this weekend that the public university is using a technicality to punish it with “excessive” security fees:

The invited speaker for the Oct. 24 event is the editor of Canadian feminist website Feminist Current, Meghan Murphy, who has a master’s degree in gender, sexuality, and women’s studies.

She will talk about “human rights and feminism on a university campus,” but WLU is forcing the society – which was formed to hear “ideas from across the political spectrum” – to use its own money “to pay for others to threaten their event!” the group said.

Feminists who are critical of transgender ideology and claim it’s an attack on feminism are sometimes referred to as “trans-exclusionary radical feminists,” or TERFs. 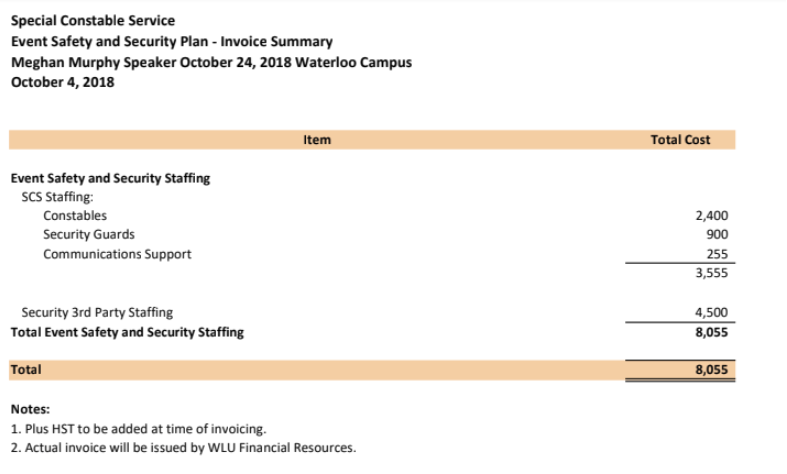 The society claims to have more than 180 members. It has held several events in the Waterloo region, where WLU has a campus, with speakers from all over the political spectrum, but not all have happened on campus.

The university previously stuck Shepherd’s group with a $5,300 security bill in order to host the “Marxist-socialist” professor Frances Widdowson, whose talk was titled “Does University Indigenization Threaten Open Inquiry?”

A journalism professor who helped design WLU’s statement on “commitment to freedom of thought” resigned from the relevant task force in protest of this fee on the Widdowson event, though the society managed to crowdfund the money to pay for security.

The society is launching another crowdfunding effort to pay the university’s security “ransom”:

LSOI strongly believes we need to keep the spirit of free speech and open inquiry alive in our universities, and radical protestors should NOT be allowed to shut down politically incorrect views through their threats and violence. Unfortunately, universities enable these protestors, and LSOI must do everything they can to succeed despite the obstacles WLU puts them through.

The university did not explain the rationale for the cost breakdown, Shepherd told The College Fix in an email: “They gave the invoice, that’s it. I asked whether the cost is subject to change, seeing as no protest has been declared so far, but no response yet.”

She called the bill for the Widdowson event “a huge overreaction” and said the university is “doing the same thing again, to try to intimidate us into not hosting the discussion.”

The Fix has asked the university to provide the detailed rationale for the Murphy fee and answer the society’s claim that it’s forcing the group to pay for the bad behavior of protesters.