A New Jersey school district and local law enforcement are investigating a couple of Halloween party attendees because they allegedly dressed up as a slave and slave master.

Here’s a “minor” detail: The party was held off campus, having nothing to do with school. Nevertheless, Watchung Hills Regional High School District officials are taking action after a photo of the gents was posted on social media.

The district even got the police to look into potential violation of hate crime laws.

Many on social media said the student with the whip was actually supposed to be Indiana Jones, and that he “did not plan his costume with the student in blackface.” 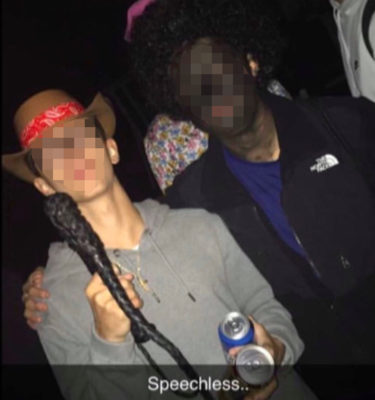 According to the Echoes-Sentinel, District Superintendent Elizabeth Jewett issued a statement saying “the school district condemns, ‘in the strongest terms possible, the conduct of some of our students who saw fit to reopen a dark chapter in our nation’s history.’”

Several commenters urged residents to contact high school administrators to address the issue directly, whether by educating students on the history of blackface specifically, or by taking steps to enhance school culture and programming. Others questioned if the high school should get involved at all as the photo was taken at a non-school event.

There was also disagreement on social media on the extent to which residents should propagate the image. …

The Bridgewater Courier News reports Jewett indicated some 150 students chose to attend diversity-related discussions on Wednesday during “flex time,” and a lunchtime gathering of the school’s Diversity Council drew 40 students, teachers, and administrators.

Ironically, Jewett said “restorative [and] cooperative processes” would be utilized “to repair the harm done.” Restorative practices are supposed to replace punitive discipline like suspensions … and police arrest. So then … why were the police called in? Despite the insensitive nature of at least the one outfit, how does it reach the nature of a crime?

Recall that white students who engage in any sort of racial mockery usually aren’t “eligible” for restorative justice.

Ultimately, the issue comes down to why the district is even investigating the matter in the first place. What’s its interest, other than the fact the kids go to one of its schools? If the powers-that-be want to hold sensitivity and diversity confabs as a result of the incident, fine. But being politically incorrect at a non-school function isn’t an actionable offense … and certainly not criminal.