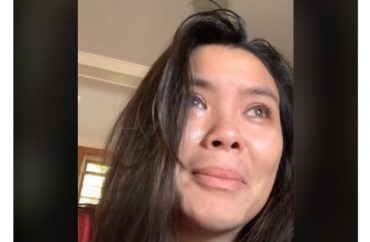 Comically blames ‘Trump supporters’ instead of her own adult stupidity

Harvard University must be relieved that Claira Janover shared her violent feelings after she graduated. Now it won’t have to explain why it punishes students for their dumb teen ramblings but not well-educated early 20-somethings who gleefully threaten to stab people for political disagreement.

The new graduate lost her pending job as a business analyst with consulting firm Deloitte after her “I’ma stab you” TikTok video went viral, she said in a subsequent video cited by the New York Post. (It’s loading very slowly as of early Thursday morning – her TikTok account is apparently getting hammered with traffic.)

She claimed Deloitte was hypocritical because it has a statement against “systemic bias, racism, and unequal treatment.” (It doesn’t denounce “All Lives Matter” or justify homicide for political views.)

In case you haven’t seen her original video, Janover faces the camera while trash-talking to no one.

“The next person who has the sheer nerve, the sheer entitled caucasity to say ‘All Lives Matter,’ I’ma stab you,” she said, jabbing her phone and appropriating street vernacular. “I’ma stab you. And while you’re struggling and bleeding out, I’ma show you my paper cut and say, ‘My cut matters too.'”

Claire Janover’s LinkedIn profile says she’s now an analyst for @DeloitteUS. The internet is forever. When will kids learn? pic.twitter.com/TZXYJwDsrc

Janover’s attitude was the perfect illustration of the progressive tendency to switch words and violence: Progressives justify censorship of speech they don’t like on the grounds that it physically harms them, and yet they will threaten or carry out violence to stop such speech.

And they profit from their warped switcheroo: A GoFundMe campaign for Janover has raised $3,500 in just seven hours as of early Thursday morning.

Before the graduate tearfully announced that Deloitte had rescinded the job offer, her Twitter defenders seem to have coalesced around the talking point that threatening to stab people for using an alternative political slogan was just an “analogy.”

Just watching her original video, the “analogy” explanation seems devised in bad faith. She is clearly angry and wants to broadcast her feelings that the phrase “All Lives Matter” is so harmful that it deserves homicide, and that she will taunt someone she just stabbed (perhaps Terry Crews?) while that person bleeds to death.

If she were a teenager showing this bravado on TikTok – with a young brain still developing, a murky awareness of consequences for threatening to stab people, and a worrisome fanaticism for a political cause she just discovered – it would be much easier for the public to say “she’s young and stupid. Let her grow up.”

And yet her high school almost certainly would have investigated her as a potential threat to other students (some of whom are known to say “All Lives Matter”). She’d be suspended, whether or not anyone took her juvenile trash-talking seriously.

Janover, however, is well into adulthood, and she enjoys the rarefied air of a Harvard graduate. She has every privilege in the world. She knew exactly what she was saying, and believed consequences didn’t apply to her, because her cause was just and she was Ivy League.

If she hasn’t already tried to get people fired for sharing their political views, she almost certainly will do so after this incident, with no hint of self-reflection.

She’s not dumb enough to really believe that “my future’s entirely compromised.” She’s a martyr for Black Lives Matter – the hateful organization, not the well-meaning slogan, which she trashed by associating it with pointless violence.

Her views are popular, her networking connections ample, and she’ll have no shortage of job offers, media appearances, and unthinking adulation from the nonplayer characters of the woke set.

At least until her expressed morality slides a hair out of alignment with the new daily dogma.