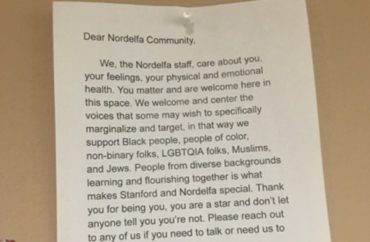 If true, ‘this is tantamount to university-sponsored censorship’

What exactly does Stanford University media relations get paid to do?

Both the Foundation for Individual Rights in Education and The College Fix are wondering, a week after the civil liberties group asked the elite university whether its staff were involved in the removal of flyers promoting an event with conservative pundit Ben Shapiro.

It wouldn’t be the first time Stanford staff encouraged the removal of flyers they disliked.

The Young America’s Foundation, which sponsored the Nov. 7 “Facts Don’t Care About Your Feelings” event, said late last month that the Stanford College Republicans had “plastered dormitories around campus” with the event flyers.

Not only were flyers vandalized soon after, but some were removed and “replaced with politically correct messages from the dormitory’s resident advisors.” In the Norcliffe/Adelfa dorm, known casually as Nordelfa, a note was put up in place of the SCRs flyers. It reads:

We, the Nordelfa staff, care about you, your feelings, your physical and emotional health. You matter and are welcome here in this space. We welcome and center the voices that some may wish to specifically marginalize and target, in that way we support Black people, people of color, non-binary folks, LGBTQIA folks, Muslims, and Jews. People from diverse backgrounds learning and flourishing together is what makes Stanford and Nordelfa special. Thank you for being you, you are a star and don’t let anyone tell you you’re not. Please reach out to any of us if you need to talk or need us to support you in any way!

With Love,
Your Nordela Staff

The SCRs wrote the same day that multiple dorms had “erected censorious flyering policies” to keep out conservative views. Nordelfa residential advisors “have gone out of their way to tear up and vandalize our flyers” and replace them with paeans to “safety” and “inclusivity,” the club said.

Club members faced “an aggressive mob of students” at the Hispanic-themed dorm Casa Zapata when they tried to put up flyers for the event. Those students shouted obscenities such as “suck my dick” and tailed SCRs members as they went to other dorms to post flyers, yet Casa Zapata staff told the SCRs later that the club had been “targeting” the dorm.

A “petulant fascist RA” at the Potter dorm lectured club members about flyer policy that he either made or did not enforce for “the flyers of other organizations behind him,” the club wrote. Other dorms told the members they must “put our names and room numbers” on the flyers.

A Casa Zapata resident told The Stanford Daily that the SCRs didn’t have the permission of staff to put up flyers and that club members were “trying to antagonize residents.” Provost Persis Drell met with Zapata residents after the incident.

The provost and Susie Brubaker-Cole, vice provost student affairs, wrote to the campus hours ahead of the Shapiro event Nov. 7 to put the blame on the SCRs. They said “some of the behaviors that have accompanied these practices have crossed a line of respectful treatment,” according to the Daily. SCRs President Stephen Sills told the Daily this characterization was false, and that Zapata residents had “harassed” his members.

When the SCRs put up a banner for the event in the early morning Nov. 4, it had been removed by 1 p.m. that day, YAF said Nov. 5. It was replaced a few hours later by a satirical banner that implied Provost Drell and the SCRs were urging the campus to “be tolerant accept racism.”

A left-wing student activist implied on Twitter he was involved in the removal of the banner. The club told YAF it had filed a police report.

context: the college republicans are bringing their annual racist hate speech (ben shapiro this time) onto campus. as always, the university just sits and watch as marginalized groups on campus are targeted.

Bill Rickards, communications coordinator at FIRE, wrote last week that neither Provost Drell nor Stanford media relations responded to his questions. He told The Fix Thursday that he had still not received a response from Stanford a week later.

“While it’s unclear who is responsible for these incidents, taken together, it appears that some individuals at Stanford would rather vandalize and tear down student speech than answer it or ignore it,” Rickards wrote last week:

More troubling is YAF’s allegation of dorm staff taking down posters. If true – and if the letter posted in its place originated from dormitory staff – this is tantamount to university-sponsored censorship, treating students more like fragile eggshells than free-thinking adults.

FIRE hopes that Stanford University clarifies who took down the posters in the Nordelfa dorm and denounces this act of vigilante, if not official, censorship.

Stanford media relations also has yet to respond to a Fix query Tuesday afternoon about the flyer incidents and policies on posting flyers.

The Fix asked if the administration had identified who removed or banned the SCRs flyers; if staff were involved, what authority they have to remove flyers and under what conditions; and what sanctions staff could face if they exceeded the bounds of their authority regarding the flyers.

Stanford has two policies governing flyers that The Fix could locate. The first specifically authorizes flyers to be posted on “any of the bulletin boards in the freshmen dormitories or houses.”

The second says: “Some campus residences allow posting but since each residence has their own policy you must check first.” It offers no sense of whether each policy must be content-neutral, or if residence staff may reject any posting they personally dislike. Flyers out of compliance with each residence policy are “not permissible.”

Nowhere in either policy does it instruct campus groups to put their members’ names and room numbers on the flyers, as the SCRs alleged they were told.