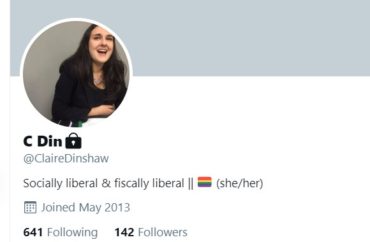 Contrarian journalist Glenn Greenwald recently coined an aphorism that comes to me almost daily as I read the news: “Journalists are authoritarians.”

In an interview with Reason, the founder of The Intercept blamed his peers for relentlessly haranguing Silicon Valley to more closely regulate the subjectively offensive speech of platform users. As a tech policy reporter in the coming-of-age period of social media, I can confirm these companies did not have stated designs on controlling what you can say, beyond complying with routine law enforcement requests and referring true threats to authorities.

The journalism mentality “used to be an anti-authoritarian mentality,” Greenwald said. “Now they work for big corporations and become authoritarians.”

The Stanford Daily is probably not a “big corporation” by any reasonable definition, but its editorial board chair is a natural at authoritarianism.

Claire Dinshaw wrote a column last week that demanded the university remove the College Republicans from campus. I assume she’s calling for the club’s derecognition, but her various over-the-top claims could also be interpreted as Dinshaw calling for sanctions against members, perhaps suspension.

Referring to the Capitol riot on Jan. 6 and President Trump’s second impeachment, Dinshaw laments that “the insurrection and trial have not inspired further investigation of the discriminatory, violent language” at institutions such as Stanford.

“There are multiple groups on campus that have platformed and promoted racist, misogynistic and hateful rhetoric over the years,” and “the most consistently unpunished offender” is the CRs, writes Dinshaw, who is minoring in feminism, gender and sexuality studies.

Her gripes appear to be that the group has used its free speech to host viewpoints she dislikes, makes claims she considers spurious, and criticizes people she likes. But as with so many young woke writers, the editorial board chair elevates this behavior to the level of violence.

“SCR’s consistent disregard for student safety and unwillingness to engage in good-faith debates are grounds for removing them from campus,” she says. Its Facebook post about transgender identity as an “ideology” that is “perverse and farcical” shows its opposition to “the humanity and existence of trans people” at Stanford.

It’s “complicit in the threatening and doxxing” of community members because the club president, Susan Rice’s son John, recorded a student trying to vandalize a sign and then reported her to campus police for allegedly using physical force to stop him.

Because the club criticized Prof. David Palumbo-Liu for cofounding the Campus Antifascist Network – which it hyperbolically called “undeniably a chapter of a terrorist group” – that makes it responsible for reported death threats against him, in Dinshaw’s view.

In her best impression of a Chinese Communist security official talking about Uighers, she calls the CRs “a dangerous and menacing presence on campus.” (Her column uses other terms popular with illiberal regimes, including “irresponsible,” “division” and “respectful dialogue,” while also mouthing the banal accusations of “racist, misogynistic and hateful rhetoric.”)

Just as The Daily Northwestern apologized for taking photos of protesters and asking students for interviews, some of Dinshaw’s complaints seem to regard basic journalism practices as threatening. She’s angry that the CRs took video of students washing away chalking for an upcoming Ben Shapiro event and posted it, instead of “reporting it to internal University channels.”

Is she seriously saying the Daily would not have posted video of the CRs washing away chalking for a College Democrats event? Recall that another college newspaper, The Daily Orange at Syracuse, published leaked video from a private fraternity event solely because it was offensive.

“It is never acceptable for any organization to intentionally subject a private individual to threats,” Dinshaw intones. What does she think could happen to the members of the CRs in response to writing about the club with such hyperbolic accusations? Journalism by its very nature draws scrutiny to subjects of coverage – and journalists themselves. (It takes a couple seconds on the internet to learn where Dinshaw is working after graduation this summer.)

Dinshaw is still upset by her first interaction with the CRs as a freshman, during a “Change My Mind” event:

During this series, SCR would write a ‘controversial stance’ on a poster board and display it in White Plaza, where hundreds or thousands of students would see it on their way to class. Some of the discussions this series was attempting to begin, such as the validity of socialism, had the potential to become genuine dialogues. Other posters used adversarial and intentionally alarmist phrasing. For example, in one “Change my Mind” series, SCR hung large poster boards stating “Abortion is Murder.”

While the pro-choice student believes “anti-abortion activists have a right to state their case,” it was wrong for the CRs to state their views plainly in a prominent public space: “[I]t is likely that a student, faculty or staff member who had personal experience with abortion was confronted with this messaging without warning.”

It’s also unacceptable that the CRs have hosted inflammatory speakers such as Robert Spencer, Candace Owens and Dinesh D’Souza. “Put simply, SCR should no longer be allowed to operate on campus”:

In any community, there is an unspoken social contract. That contract must include space for differing opinions, but it also must include a commitment to community members’ safety and well-being. SCR has broken this contract countless times.

According to the CRs, the club submitted a letter in response to Dinshaw’s column but the newspaper rejected it as violating the newspaper’s “Editorial Standards,” without specifying what parts violated which standards:

Far from being committed to publishing diverse viewpoints, we are sad to see the Stanford Daily’s active role in promulgating leftist fascism and ideological conformity. We are currently considering other avenues to publish our response.

It previously responded to Dinshaw’s “unhinged screed” by saying her real beef with the club is that “we unflinchingly promote conservative ideas.” It’s hard to argue with that.

Yes, Dinshaw is not writing as an objective reporter. She chairs the part of the newspaper tasked with providing the newspaper’s voice. But it’s a voice that is alarmingly authoritarian and intolerant of unfiltered disagreement – one that seems ascendant in elite student journalism.