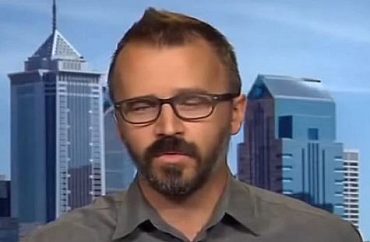 ‘Ol George Ciccariello-Maher, infamous for his tweet “All I Want for Christmas is White Genocide” from two years ago, finally got a little pushback. From students.

As part of the Johns Hopkins University Milton S. Eisenhower Symposium speaker series on November 28, Ciccariello-Maher discussed — what else? — white supremacy and American politics in a presentation titled “Discourse[!!] in the Trump Age.”

The now-political activist and writer, formerly employed by Drexel University, “justified his radical views” to the audience by lamenting the dissolution of the American political center: “We live in a moment of radical polarization […] there is a return of history in the form of polarization, populism and resurgent white supremacy.”

The liberal response to far right is to recommend more civility. That we should be civil with those who want to kill and maim and destroy and send pipe bombs and murder Jews and murder migrants. We should be civil with them. We will not defeat white supremacy through politeness, through kindness, through civility. We will not defeat the enemies of humanity, through polite rational debate.

Indeed, Ciccariello-Maher is so concerned about the welfare of Jews that his Facebook page is full of posts defending a certain Temple University professor, including a link titled “The Israeli Lobby Groups Behind the Political Lynching of Marc Lamont Hill.”

The radical nitwit — who’s also tweeted (ready?) that he wished a school police officer was “done like Old Yeller,” said the Las Vegas mass shooting was due to “white people and men [who] are told that they are entitled to everything,” said the NFL rule against taking a knee was akin to a Nazi salute, and, most recently (going back to the Christmas theme), retweeting that “it’s beginning to look a lot like Christmas” in response to George H.W. Bush’s death — did not find the JHU audience as easygoing as his former pupils.

(By the way, in yet another example of mixed-up college student paper mores, the News-Letter’s Katerina Frye writes that “some consider Ciccariello-Maher to be controversial for his radical views” — emphasis added.)

Student Dave Taylor said Ciccariello-Maher was “evasive” and “refused to address the concerns of students who challenged him.”

[H]e was not entirely willing to accept the totality of other peoples’ questions. He was a bit manipulative — he tried to delegitimize questions. When he was actually pressed on how he felt we could make these institutional reforms that are necessary to bring about the change that he desires, he really had no concrete steps. I feel that he is more of a provocateur where there is perhaps more controversy than substance.

In a Thursday News-Letter op-ed, Michael Leff and Joseph Klein pointed out the prof’s ridiculous views on the happenings in Venezuela. (Ciccariello-Maher’s response to this was a few laughing emojis on a Facebook post.)

Well, no wonder. Ciccariello-Maher lives in a world of theory and unreality. During the chat he also called for the abolition of not only Immigration and Customs Enforcement (ICE) and the border patrol, but police departments.

He also cited the radical militant group Antifa as an example of — wait for it! — “nonviolent protest aimed at subverting police and border patrol objectives.”

Because, as you know, the definition of “militant” — a “person who fights, is aggressive” — is nonviolent.