The Syracuse University protesters known as #NotAgainSU will continue their occupation of an administration building despite the coronavirus-induced evacuation of students from campus.

Syracuse announced a week ago it would transition to online classes at least until the end of March. According to The Daily Orange, #NotAgainSU said in a Friday statement that the university “should not use its response to COVID-19 as a reason to ignore the movement’s demands” (such as these).

The statement chides university administrators for “abruptly” canceling in-person classes as the decision “neglects” students who work, have food insecurity, and lack access to wifi.

It also references media coverage of the coronavirus featuring “strong racist, xenophobic, and sinophobic elements,” things which led to the formation of the group in the first place.

While the coronavirus is “public health crisis,” the statement continues, “white supremacy at Syracuse University is an ongoing crisis that has not been adequately addressed […]”

Indeed, the latest sticking point in negotiations is #NotAgainSU’s insistence Syracuse acknowledge that some 30-plus “hate” incidents since November are the result of “institutional white supremacy.”

#NotAgainSU criticizes the “few concessions” Syracuse already has offered, which include five new mental health counselors, $5 million for programs dedicated to students of color, and $5 million for needs-based scholarships.

“This latest offer is unacceptable and does not begin to acknowledge or repair the white supremacy-based institutional violence the university enacts on people of color,” the statement reads. 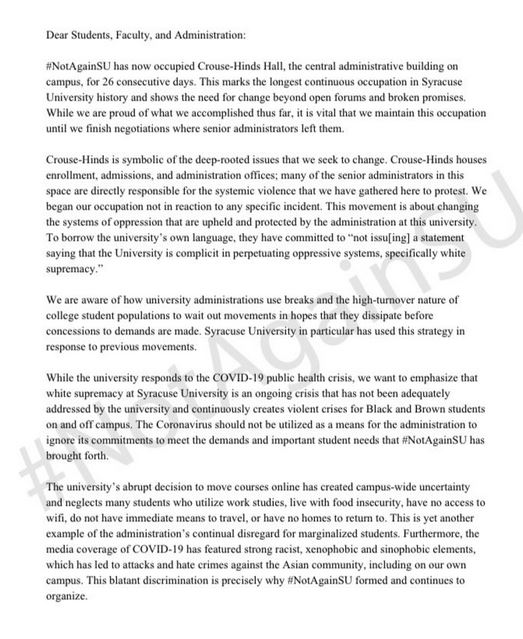 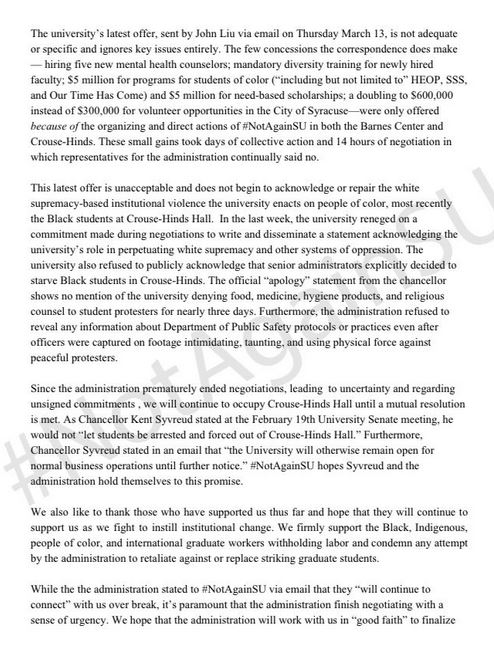 #NotAgainSU also tweeted last week it “has reason to believe” Syracuse will order an “impromptu construction project” of Crouse-Hinds Hall in order to get rid of the occupiers.