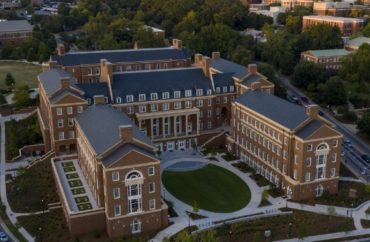 Only 8 percent of humanities professors identified at UGA vote Republican

Five out of 11 University of Georgia humanities departments have zero Republican professors, according to an analysis of the state’s election data conducted by The College Fix.

The comparative literature, English, history, religion and sociology departments do not have any Republicans teaching their students.

The classics, geography and philosophy departments each have one Republican professor, and the anthropology, linguistics and psychology departments have two.

The Fix contacted the philosophy, religion and history chairs to ask for comment on the tilt of their departments and if they have plans to create intellectual diversity, since these subjects should lend themselves to a variety of political approaches and concepts.

None of the chairs responded to a September 28 email.

The survey looked up a total of 268 professors based on their names listed on faculty department websites, as well as their curriculum vitae and research papers to match middle names, to identify the scholars in the election data.

Of the 268 professors, a total of 116 could be identified. Of those, 10 professors voted Republican at least once in one of the two recent primaries, and 106 only voted Democrat in one or both.

MORE: ‘Some White people may have to die,” UGA TA says

The College Fix emailed all 10 professors who voted Republican asking them what party they identify with, and only one responded, saying he identifies as a Democrat.

Therefore, the analysis found only nine Republican professors among the 116 who were identified, or about 8 percent.

The campus media relations team did not respond to questions on the findings.

This is the fourth report to come out from The Fix in recent weeks about the political affiliation of professors.

A survey of University of North Carolina at Chapel Hill faculty found Democrats outnumbered Republicans by a 16 to 1 ratio.

The results were less tilted at Ohio State University, where Democratic professors outnumbered Republican ones by a ratio of about 7 to 1.

The ratio of Democrats to Republicans at the University of Nebraska-Omaha is 5 to 1, according to a Fix analysis.

One conservative UGA student weighed in on the findings in an email to The College Fix on Monday. Noah Ring, a marketing major, said in his experience, most professors avoid getting political, but it could be his major does not lend itself to such discussions.

“I will say that one of my professors made a lot of remarks about the Supreme Court overturning Roe,” the Turning Point USA and College Republicans member said. “I’ve also dealt with professors not allowing you to come to office hours or ask questions after class unless you wear a mask.”

The Fix has chosen not to publish its spreadsheet of specific names to protect the identity of Republican professors.

The following breakdown is for the University of Georgia. There are 268 unique professors, and another four who teach in two departments, for a total of 272. Of those four, three voted Democrat and one is nonpartisan.

“Nonpartisan primaries are used to narrow the field of candidates for nonpartisan offices in advance of a general election,” such as judge, according to Ballotpedia’s explanation of Georgia elections. Unknowns are professors who could not be identified or did not pull a ballot.

Editor’s note: The article has been updated with a student comment.