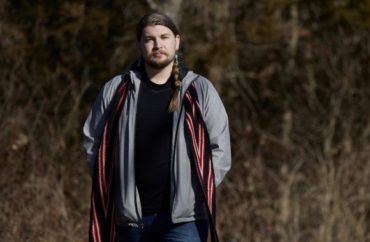 Haskell Indian Nations University has a Student Rights Office. What it doesn’t have is a publicly available policy telling students what their rights are.

The federally operated tribal university’s failure to update the “lorem ipsum” Latin dummy text on the office web page shows its disregard for students, according to a First Amendment lawsuit against Haskell.

Jared Nally, editor of The Indian Leader, claims the university in Kansas unconstitutionally censored him, deprived him due process and tried to cripple the newspaper’s operation.

Haskell has a “tradition of retaliation and censorship against student journalists,” most recently under President Ronald Graham, who displays a “reckless and callous disregard” for students’ constitutional rights, the suit claims. It also names Bureau of Indian Education Director Tony Dearman as a defendant.

Graham’s October “directive” to Nally, which ordered the student journalist (above) not to engage in common journalism practices, prompted a warning letter from the Foundation for Individual Rights in Education, Student Press Law Center and Native American Journalists Association.

The president forbade the student paper from criticizing administration officials, requesting information from government agencies or taping interviews without permission, all of which are legal in Kansas.

“You have compromised your credibility within the community and, more importantly, you have brought yourself, The Indian Leader, Haskell, and me unwarranted attention,” Graham told Nally.

Though the Bureau of Indian Education said Graham rescinded his directive Nov. 20, he didn’t tell Nally or the groups intervening on his behalf. They learned about it three months later, due to what the bureau called an “administrative error.”

The suit also claims that Haskell targeted the paper’s funding by slicing more than $10,000 from its operational budget “without any notice or explanation.” Alongside the university’s refusal to recognize the Indian Leader Association, the publisher of the paper, as an official student organization, this has impeded its ability to conduct basic accounting.

FIRE is representing Nally in his lawsuit. Its video emphasizes the “gibberish” dummy text that still remains on the university web page on student rights.

“Joining our student newspaper gave me a voice, and unfortunately it’s going to take a lawsuit for the university to listen to it,” Nally said in a FIRE press release.

He’s seeking wide-ranging damages along with attorneys’ fees, injunctive relief against the defendants, restoration of the sliced funding, recognition for the Indian Leader Association, and a revision to Haskell’s speech policy.

Haskell has a legal history with The Indian Leader going back over 30 years.

In 1988, the university temporarily ceased publication of the paper, which had published a critical piece revealing allegedly unethical behavior of Haskell’s then-president.

The next year, a faculty advisor took full control of the paper’s editorial content, prompting the student journalists and the Indian Leader Association to sue and obtain a settlement.

Haskell agreed never to interfere with the paper’s editorial content, constitutional rights of student journalists or the disbursement of the paper’s funds upon written request. The settlement explicitly prohibits prior restraint and censorship.

By filing a lawsuit, Nally hopes to hold Haskell accountable to this agreement and recognize the role of student journalists. “We exist to hold our university accountable and to inform our fellow students and community,” he said in FIRE’s release. “We have a right to press freedom and to share these stories.”

The October “directive” followed a series of events surrounding the paper, according to the suit.

Nally looked into Haskell’s reporting of student data to the U.S. Census Bureau, suspecting that it was hiding “marginalized biracial students” by marking everyone as “Native American.”

He submitted a personal grievance letter against Tonia Salvini, the official responsible for responding to racial bias claims, to Graham shortly before the directive.

That same summer, Nally covered Haskell’s nearly 200 percent increase in student fees for the upcoming academic year. He covertly recorded a conversation with a Haskell financial aid officer, some of which was published in a July editorial.

The administration then ordered faculty to “cease their roles as advisers to student organizations for the remainder of the summer 2020 term” – a change that solely affected the Indian Leader Association, which was the only active student organization at this time.

The university replaced its advisor with interim Dean of Humanities Joshua Falleaf, triggering a staff revolt for fear that the administrator would jeopardize the paper’s editorial independence, the suit says.

Their plan of operation, submitted to the university for approval in September, included new measures to keep Falleaf out. As of the lawsuit’s filing Tuesday, the university has not approved this plan.

Finally, in October, Nally asked the local police department about the death of a food-service worker close to him, since the university didn’t announce it as usual for employees who pass away. He published an article a few days later.

According to the lawsuit, in response to these incidents, Graham (below) ordered Nally to halt common journalism and even citizen practices, including contacting “the police department (or any other governmental agency) and demand[ing] anything on behalf of the University.”

Graham told Nally that he must treat all members of the administration with “the highest respect.”

The directive attempted to impose a prior restraint on the paper by making it accountable to the “CIRCLE” policy, which stands for communication, integrity, respect, collaboration, leadership, and excellence. According to the code: “Discussion and expression of all views is permitted, consistent with Haskell’s CIRCLE values and subject only to requirements for the maintenance of order.”

For Haskell to incorporate the CIRCLE policy into its code of student conduct by itself violates students’ First Amendment rights, as it subordinates protected speech to a subjective set of rules, the lawsuit asserts.

Under the “integrity” value, for example, administrators have “unfettered discretion to police, burden, or punish expression that does not conform to the individual administrator’s views on whether speech demonstrates ‘integrity.’”

Though Graham threatened Nally with “disciplinary action” if he failed to conduct himself in accordance with the code, the president violated procedural requirements by not submitting an incident report within five days of an alleged violation or providing Nally “any notice, any hearing, or any opportunity to appeal.”

For fear of punishment, Nally refrained from reporting any news about campus and the paper didn’t publish any story on the directive itself, despite receiving media coverage from the Associated Press and the Kansas City Star.

The suit also claims that Nally has withheld a story “concerning President Graham’s relationship with the Kansas City Chiefs of the National Football League.” Graham is publicly listed as a member of the Chiefs’ American Indian Community Working Group.

Tony Dearman, the BIE official, referred Nally’s complaint against Graham to human resources. An investigator told him more than two months later that Graham was under investigation but not for constitutional violations, which troubled Nally.

The bureau told FIRE a full “90 days after” Graham’s directive that it had been rescinded Nov. 20. Graham sent Nally a similar email Jan. 13, the suit says, calling the delay an “administrative mishap.”

The three press freedom groups who initially warned Haskell sent another letter to Graham Jan. 19, calling for its CIRCLE policy to be revised as “aspirational” values. Though Haskell updated its code a few days later, the CIRCLE values still constrain free expression.

The Indian Leader Association is supposed to receive a third of the total student activity fee funds.

Haskell has violated its own policy by not sending Nally a monthly account statement for the duration of his tenure as editor-in-chief, according to the suit. He’s also had difficulty assessing the account balance.

The university’s student bank administrator, Jeri Sledd, has never provided the newspaper an account statement despite multiple requests during spring and summer terms. Sledd also failed to respond to Nally’s submission of the association’s plan of operation and renewal of its recognition for the rest of the calendar year.

On Jan. 11, Sledd finally responded that the plan of operation had been received, but that it had yet to be approved. (The suit does not mention that Sledd said anything about the organization being renewed for recognition.)

“When Haskell finally sent Nally an accounting of the Indian Leader Association’s Student Bank account, it was short over $10,000,” the suit claims (below). Of the three most recent deposits into its account, each were “smaller than anticipated.”

As of the lawsuit’s filing, Haskell has not contacted the association to inform it of any change in allocated funds. The financial hurdles forced the group to forgo “printing hard-copy issues, hosting virtual events, or investing in improvements in technology.”

Nally alleges the chilling effects from Graham’s directive have caused him emotional distress ever since, harming his sleep and academic work. He fears that Graham will reinstate the directive or take other actions against him.