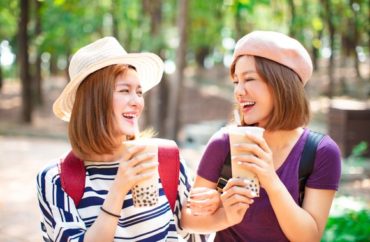 The University of California-Berkeley has been paralyzed by visits from anti-feminist provocateur Milo Yiannopoulos, Patriot Prayer founder Joey Gibson and black bloc anarchists.

Yes, The Daily Californian published a feature on the “slew of controversy from students and community members” about the exploding popularity of bubble tea shops near campus.

Their beefs boil down to sugary drinks worsening the “food insecurity” of students, who have to walk an unjust 20 minutes (really) to Trader Joe’s, the nearest “full-scale” grocery store to campus (Safeway is 1.6 miles).

They can also buy fresh produce at the Berkeley Student Food Collective, a paltry three-minute walk from Sproul Plaza, “the bustling hub” of campus, as even the Daily notes.

There are at least 16 bubble tea shops within a one-block radius of the UC Berkeley campus, the vast majority of which are located in Southside. Expand the search to a two-block radius, and students have more than 22 bubble tea shops to choose from, including Feng Cha Teahouse, YiFang Taiwan Fruit Tea and, most recently, Taiwan Professional Tea. …

Kristine Madsen, faculty director at the Berkeley Food Institute, scolds the community for so thoroughly enjoying the Taiwan-originated sweetened beverages that are common wherever you find thriving Asian communities (the dominant racial category on campus):

“One of the reasons we tax sugar-sweetened beverages now is that it’s the one product we know has zero nutritional value — it’s just water, sugar and some flavoring,” Madsen said. “Boba … is exactly the same as soda. It’s not any better for you and it’s something that’s fine every once in a while, but certainly isn’t what we’d hope students are spending their money on.”

The institute, which receives both university and private donations, “strives to transform food systems to expand access to healthy, affordable food and promote sustainable and equitable food production,” according to its website.

Madsen gets an assist from an outside scholar, Pepperdine’s Loan Kim, who studied the nutritional value of bubble tea for a 2016 study. In order to avoid the “anabolism and weight gain” from bubble tea, Kim recommended to the Daily that customers “opt for unsweetened tea with no milk and minimal add-ins.”

In other words, take the fun out of bubble tea for sugar-loving Americans.

The popularity of the nearly two dozen bubble tea shops – even new ones have “lines out the door” – is creating a so-called food desert near campus, according to student Teddy Lake, who works at the Berkeley Student Food Collective.

Remember, the collective is a three-minute walk from Sproul Plaza:

“Most families in Berkeley have kids and some kind of vehicle that allows them to mitigate the problem of sparsely spread out grocery stores,” Lake said. “For students, that access isn’t as readily available.”

Another student, Katie Lin, wishes smaller grocery stores would take over some bubble tea shops, but that’s unlikely because of the retail characteristics of the neighborhood.

Grocery store margins are razor thin, rents near the university are high, and the retail spaces are too small for full-scale grocery stores such as Trader Joe’s, Stuart Baker of the Telegraph Business Improvement District told the Daily.

At least campus activists aren’t complaining that the bubble tea is culturally inauthentic or the shops are racist.

MORE: Oberlin refuses to respond to libeled bakery, it might offend students