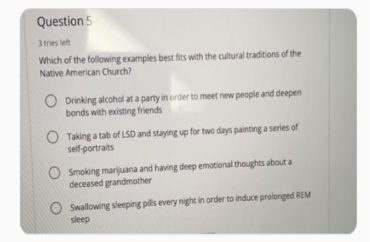 Illinois State University has pledged to investigate a question on a quiz that offended Native Americans.

On Twitter the public university told those on the social media platform expressing anger over the question that it is “completely inconsistent with Illinois State’s core values.”

“We take our commitment to diversity and inclusion seriously,” the university states on its Twitter account, asking those upset to file an incident report so the issue could be addressed by campus leaders as soon as possible.

The issue came to light from an Aug. 30 tweet that said: “@IllinoisStateU IS THIS YOU?!?! NATIVE TWITTER/TWITTER BLOW THIS UP. THIS IS UNACCEPTABLE. ABSOLUTELY RACIST QUESTION. #IllinoisStateUniversity.”

The question asked: “Which of the following examples best fits with the cultural traditions of the Native American Church?”

The possible answers are:

Smoking marijuana and having deep emotional thoughts about a deceased grandmother

According to the original Twitter poster, the correct answer is C.

Not only has the university pledged to look into it, but so has Pearson, which published the textbook on which the question is based.

This content does not represent our commitment to creating fair representations of all people in our materials. We’re taking action to remove it.

Both Pearson’s and the university’s responses has sounded the alarm with the Foundation for Individual Rights in Education, which called responses “troubling.”

Most obviously, Illinois State has an obligation to ensure that faculty are protected by the university’s commitment to academic freedom in both their research and teaching. …

It’s possible that this quiz question and its associated answer choices are not relevant to the class, are incorrect, or simply represent bad pedagogy. If so, that is properly a matter for the faculty to determine using the ordinary academic procedures that every university has in place. But that’s not what Illinois State chose to say. Instead, in the name of taking “[its] commitment to diversity and inclusion seriously,” it flatly states that “[t]he sentiments of that message are completely inconsistent with Illinois State’s core values,” and asked the students to fill out a “public incident report” (among the choices of type of incident is “Bias Incident”).

But faculty do not, and must not, have an obligation to make all their questions and answers (or their “sentiments,” whatever that means) appear to conform to the university’s “core values” — and this is particularly obvious when the entirety of the context presented is a screenshot of one quiz question. From the tweet, we don’t know what might have preceded the question or why the question was being asked. Even if this turned out to be irrelevant, it’s easy to imagine perfectly legitimate questions on a variety of topics from politics to history to medicine presenting questions and/or answers that some will find offensive. It’s certainly possible to imagine a quiz question that would be unjustifiable under any standard, but this simply doesn’t rise to that level.